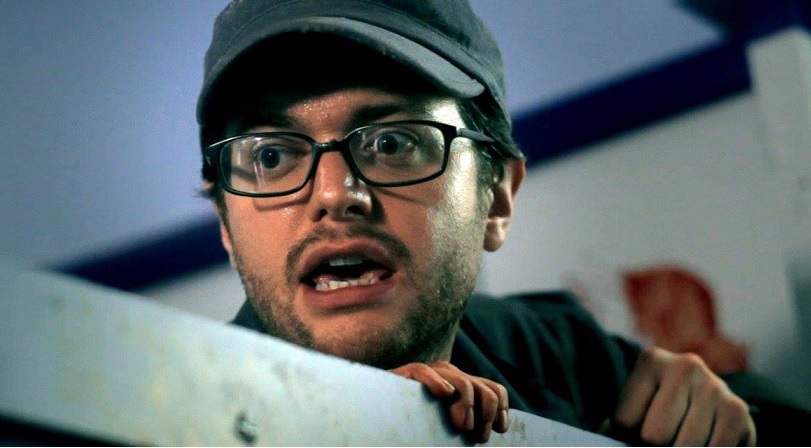 Stuck in a toilet cubicle whilst tying to stay alive during a zombie invasion? Yep – you got it. This is the latest horror comedy from team Dan Palmer and Christian James entitled STALLED.

After being flushed with praise from the critics and wiping the floor clean at last year’s FrightFest, STALLED is another indie Brit success story. Following a maintenance technician called out to fix something in the ladies bathroom, people suddenly take to eating each other with the best way to keep safe being locked behind the toilet door.

The Chords had the pleasure of talking to the writer and star of STALLED, Dan Palmer and here is what he shouted to us from behind the cubicle door.

So firstly tell us a bit about yourself Dan and how you got into acting/scriptwriting?

I went to a,sort of, film school in Bournemouth in southern England. It was one of the most respected in the country so I felt pretty lucky to get in. That honour slowly dissipated over the months as the course revealed itself to be a bit all over the place. One guy turned up for the first month and came in for the last and recieved the same qualifications as the hardest working student there! Due to my frustations with the curriculum I started making my own stuff. I was one of the few people there that didn’t want to direct so, as a writer/performer, I was like a kid in a candy store when it came to finding folks to shoot my terrible scripts. I soon migrated towards Christian James, who ultimately directed STALLED. We were the two youngest students there by quite a margin ..we also had similar tastes in film and a similiar disinterest in hard work.

So you not only star in STALLED but wrote the script as well. How did you initially come up with the whole idea?

There are a number of different things that led me to the idea but one of them, and I recently told this story for the first time at The Prince Charles Cinema Q&A, was back when I was a kid doing work experience for the local newspaper. I simply couldn’t find the toilets and left it so long it seemed silly to ask anyone. So, I opted to run down to the local Wimpy (ask your grandad, kids). One afternoon I was sat on the loo, doing what comes naturally ..or doesn’t if you had been eating at Wimpy, when the door started rattling. Someone wanted in! Being English I politely coughed, but the rattling persisted. Eventually it stopped so I thought I was safe, then after a moment the door was wrenched open and the lock flew from it’s fixing!

A fifteen year old me was standing there with my pants down with an old man just staring at me! I made a hasty exit. Needless to say that has always stayed with me and an element of that is in the script. My thinking was, aside from the zombie threat, if we tap into the universal awkwardness and fear of using a public restroom it might just work.

Well it certainly worked for FrightFest didn’t it? That must have been quite a boost for your team considering the response the film got.

Yeah, that was pretty crazy. Just being accepted and having our UK Premiere at Leicester Square would have been good enough, but the fact that we were given a third screening due to high demand and that we were hailed as one of the best films of the festival was nuts. Our film had one of the lowest budgets too. I mean, RIPD screened the same day and absolutely tanked – STALLED‘s entire budget wouldn’t have paid for Ryan Reynolds’ hairspray expenses.

Off the bat – what would be the first thing you would do in a Zombie Apocalypse?

The world seemed to go vampire mad over the last year and now it’s flesh-eating zombies that are taking over. Was it your intention to play on the viewer’s new found fascination with these creatures?

Never. Trying to get a low-budget movie off the ground takes so long it makes no sense to chase trends as by the time the public see it that fad is normally long gone. I have always wanted to make a zombie film since seeing Day of the Dead as a twelve year old so the current popularity was neither a driving factor nor a deterrent.

PS: I have a vampire script.

Even though this is about zombies it is at the end of the day a horror comedy. Care to share with us what the funniest scene was that you filmed?

It was a fifteen day shoot with no budget in a toilet cubicle built inside a freezing cold barn in the middle of November …in which I am in every scene. Nothing funny to report!

How would you say your film stands above the countless other horror comedy films out there? Say Sean of the Dead or Severance for example?

I think STALLED is its own beast. People understandably think that the film will be all poo jokes when they hear the concept or watch the trailer, but once they see it they seem to be quite surprised by what the team have come up with. This may sound insane but the film probably has more in common with Her than Shaun of the Dead.

Anything already on the cards for your next project?

Well, I have a number of projects ready to go but frustratingly nothing is moving at the moment. With the great response we have had with STALLED I would have hoped we would already be in the midst of a juicy new adventure. Alas, not. But fingers crossed and all that. 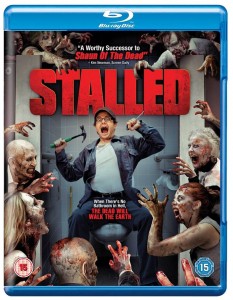 And finally, can you let everyone know where they can grab a copy of STALLED?

Gladly! STALLED will be available in the UK on both BluRay and DVD from February 17th. You’ll be able to grab a copy from ASDA or you can pre-order at Amazon etcetera.

In the States it is already available on iTunes and VOD and the DVD hits there March 4th. There are lots of special features so it’s well worth checking out if you are into the movie-making process, zombies ..or toilets.

Firstly we would like to thank Dan for taking the time to talking to us and what great answers he gave too. I’ll be sure to warn Emma Stone he may be coming for her should a zombie outbreak unfold! Grab your copy of this zombie infested flick from here and sit back and enjoy. For now though we’ll leave you with a trailer you can watch on your phone when you go for a quick toilet break. Just don’t drop it down the pan… 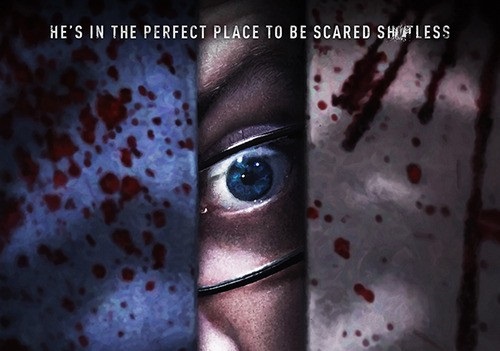 After hearing the writer and star’s thoughts about making Stalled, a new fresh take on zombie horror, we thought we would take a few...