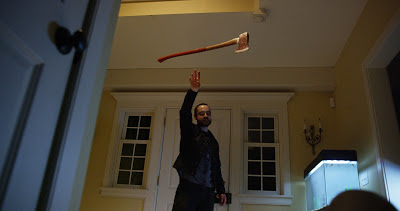 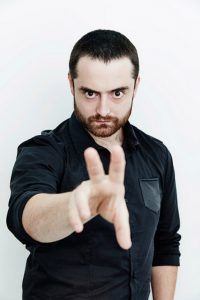 Prepare to be submerged in a piping hot telekinetic bloodbath whilst reveling in the weapons-grade firework display as Joe Begos’ violent revenge thriller The Mind’s Eye releases in cinemas and digitally today.

The film, which I recently referred to as, “the ultimate action-packed revenge rendition of Cronenberg’s Scanners, sans social commentary, this side of the ’80s,” follows two telekinetic fugitives, Zack Connors (Graham Skipper) and Rachel Meadows (Lauren Ashley Carter) out to avenge a deranged doctor intent on harvesting their powers.

In celebration of the impending release, CinemaChords caught up with leading player, Graham Skipper who talked about his early beginnings with Begos, the recent deluge of ’80s genre movies and shows audiences are being treated to, a couple of films he has helmed himself, and a whole lot more…

CinemaChords: This is your second feature with Joe Begos. How did the two of you build up such a strong relationship both on and off set?

Graham Skipper: So I played Herbert West in ‘Reanimator: The Musical’ here in L.A. and Stuart Gordon directed it. At the time, Joe was Stuart Gordon’s assistant. He ended up also being the stage manager for the show and he and I are both huge horror nerds so we ended up trading DVDs and just talking about all kinds of horror stuff all the time and it was through that that I ended up getting to do Almost Human.

CC: The films you’ve starred in with Joe, as well as Jackson Stewart’s recent Beyond the Gates, all put both feet very firmly in the VHS era. Was that purely down to coincidence or is that the realm you feel more at home in?

GS: Gosh. I guess that it’s partly that. These are definitely all the movies that I want to make; I’m a big horror fan and obviously of the age of the mindset that things like the VHS era and the ’80s and all these kinds of movies are things that I’m interested in already. But I also think that, as a result of that, my friends and the people in the industry that are making movies right now share that similar desire to make those kinds of movies.

CC: On that same subject, why do you think ’70s and ’80s love letter projects are so popular of late amongst filmmakers and audiences? “Stranger Things” is the obvious biggie everyone’s raving about right now.

GS: I think that it’s because people right now who are in their 20s and 30s who are making a lot of these independent films are the ones who grew up in the era and I think we always hold great regard for our childhood and what helped to form us. “Stranger Things” is a great example. People love it, not just for the nostalgia, but because the show really captures the feel of that era; and who doesn’t what to relive their childhood or that moment when you got to go see Poltergeist in the movie theater?

CC: Coming back to The Mind’s Eye, in one interview Joe said he wrote the part specifically for you because you were “a supremely blue collar kind of guy” and you gave an “off the grid drifter feel” to the character. And then he said that your “giant bulging eyes were integral to the telekinetic scenes.”

GS: Yeah. I’m so lucky to know Joe and so lucky that he wrote it for me. He wrote such a great movie character in Zack and when I first read the script I laughed because he does have this drifter aspect to him and he’s sort of this reluctant hero, but at the same time his eyes bulge out of their sockets so I was like, “Ah yes, Joe! I know what you want here.” But it’s great to have a role like this that not only plays to your strengths as an actor but also plays to your physical strengths and plays to the types of movies that you want to make. It’s so exciting to get to play in a universe where you have superpowers and you get to fly around and you get to throw things around with your mind. That’s why I became an actor: To play. And Joe gave me that opportunity.

CC: Having worked with Joe on his directorial debut, Almost Human, and now on The Mind’s Eye, how would you say he has progressed as a director?

GS: I think that he’s always been super confident and super certain of what he wants and how he wants it. But I think now what I saw was more of an understanding of the time and the patience that it takes to really get this stuff right. Almost Human was a very short shoot and it was “get everything at all costs,” and I think that’s part of the energy of why it’s done so well. With The Mind’s Eye we had a much longer shoot. We really took time to make sure all the stunts looked right and to make sure all the special effects were filmed exactly right and I think that plays off on screen. So I just saw that progression really; the way that the whole production came together and how it was very detail-oriented. 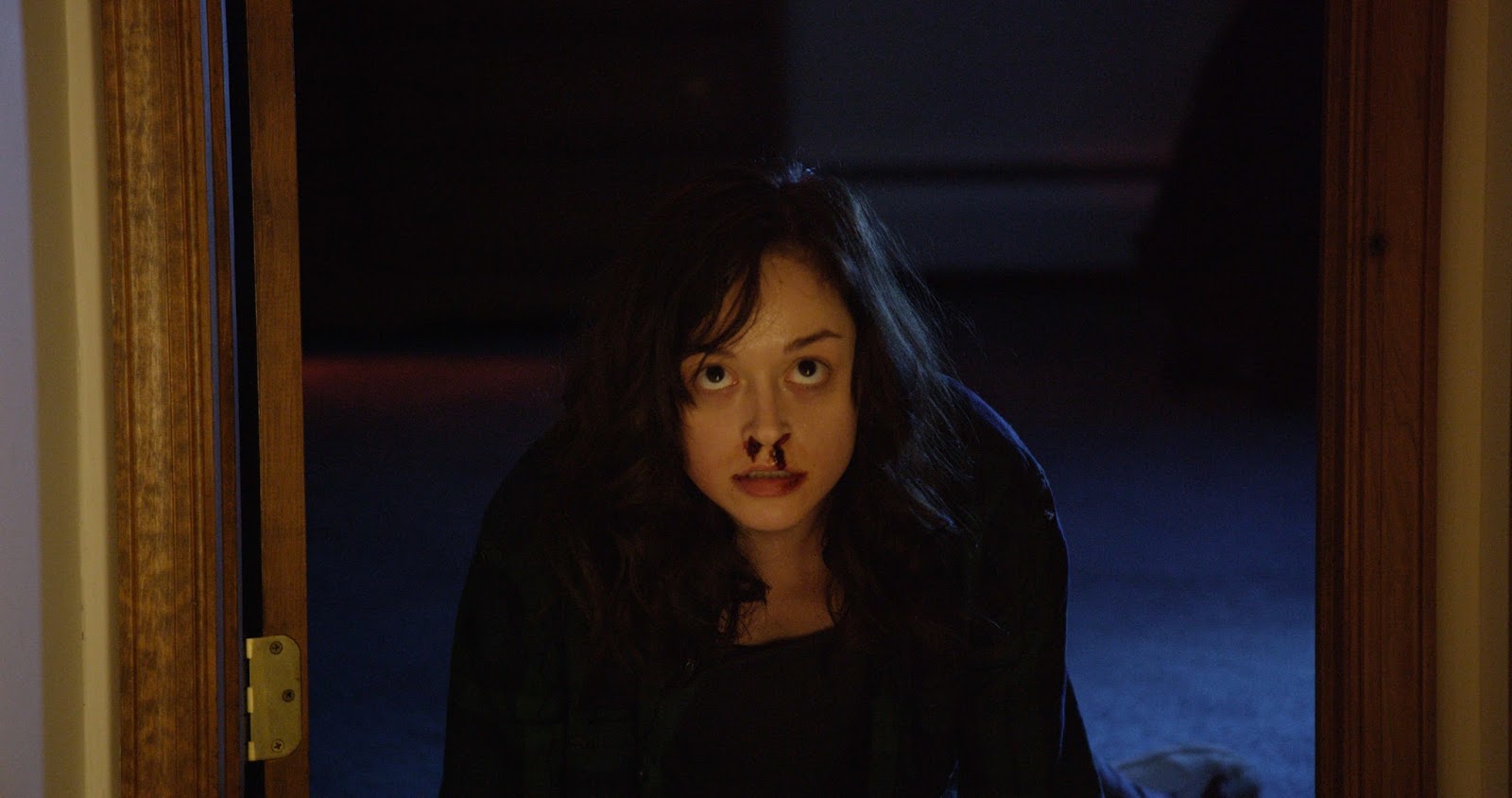 CC: It must have been a blast working with such a great ensemble cast of familiar horror talent.

GS: It was great. I’m already a big fan of all their work across the board so it was like getting the fanboy every time one of them walked on set. It just got me so excited to be able to work with them. I think when you know someone’s work already it gives you a sense of comfort in that, “Alright, I know that in this scene were going to really be able to play with each other.” We’re all genre fans and we all take genre films seriously so it really feels like a family.

When you talk about working with Larry Fessenden, he’s a genius and a legend. Just to be on set with him, to see how he handles himself as an actor, to ask him questions about his different projects was great. One of my favourite horror films of all time is Wendigo so getting to sit there and work with Larry and John Speredakos and have that time was such a blessing. I was super lucky with how Joe cast this movie and your performance is only as good as the performances of everybody around you so I was a very lucky actor in that sense.

CC: Joe told me how you all camped out in cabins in freezing cold temperatures during the shoot. That must have brought its fair share of fun and problems.

GS: Oh yes! It was like the worst blizzard that New England had seen in however many years with like three feet of snow on the ground. There was one day when we got trapped in our cabins out in the woods because a blizzard hit while we were filming out there and the snow plough couldn’t get to us in enough time. But at the same time it was great because everybody is stuck together and everybody’s in this thing together and we just wanted to make this movie as awesome as we could. My favourite story to tell is that one night we were shooting outside overnight and the temperature, not including wind chill, was negative 27ºF. It was insanely cold. It was totally miserable, BUT as an actor, there’s no pretending any more. You’re just doing. You have to follow your instincts and you have to do everything honestly because your brain can’t spend the energy to think fastly. Ultimately, the cold ended up becoming a character of its own in the movie, which I think really added something above and beyond.

CC: To wrap up, can you tell us a little about a couple of projects I know you have coming up as a director: Space Clown and Sequence Break.

GS: Yeah. In terms of Space Clown, a few years ago, me and a couple of friends decided that on no money we were going to try and make a goofy little Troma inspired movie. Se we made it in our backyard over a week and it’s done but it’s not out there just yet. We didn’t really make it with commercial intent in mind. We just sort of wanted to do it and see what happened. Having said that, we are actually talking to some folks right now about getting it out into the world which should be super fun.

And then with Sequence Break, we just wrapped production on it and we’re in post. It’s a really exciting movie and stars Chase Williamson from John Dies at the End and Fabianne Therese from Southbound and Starry Eyes. It’s a metaphysical sci-fi horror movie about a mysterious video arcade machine that somehow is causing the main character to have these strange biomechanical hallucinations and bizarre Cronenbergian mutations on his body. Hopefully soon we’ll have information about how people can start to see it and we’re hoping to get it out to some festivals and out to the world…

We’d like to thank Graham Skipper for chatting with CinemaChords and we SO recommend that you catch The Mind’s Eye as it hits theaters, VOD and Digital HD today, August 5.