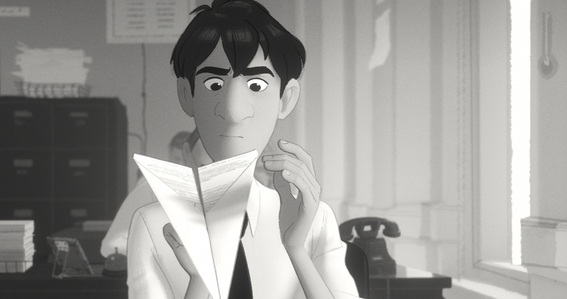 In another Oscar winning film, Paperman captivated a lot of audiences last year and this. Showed as a preview before Walt Disney Studios film, Wreck-It Ralph, Paperman proved that not only can a short film vastly improve the feature it’s connected with but could also be one of the best animations of all time. Seriously, that good.

Paperman is a sweet romantic story set in the heart of New York City. On the way to his boring job, George bumps into the beautiful Meg after one of his papers wraps around her face. Captivated by this young woman and the lipstick stain on his work, George is amazed to find that she actually works across the street. To get her attention, George sends over a series of paper planes with hilarious results.

The genius here is the expressive use of the pencil. Using the hand-drawn style that Walt Disney Studios is famed for, in less than five minutes they prove why they are the masters of the genre. Able to highlight a range of emotions for our characters, Paperman is poignant and great. With such a fantastic score by Christophe Beck, there is nothing that doesn’t engross you and warm your heart.

John Kars, director, has created an ingenious short film. It is nothing short of breath-taking, with the ability to take you into the story and leave you rooting for George. Paperman is romantic and innocent with such a stunning end that will give you goosebumps.

A small work of art.