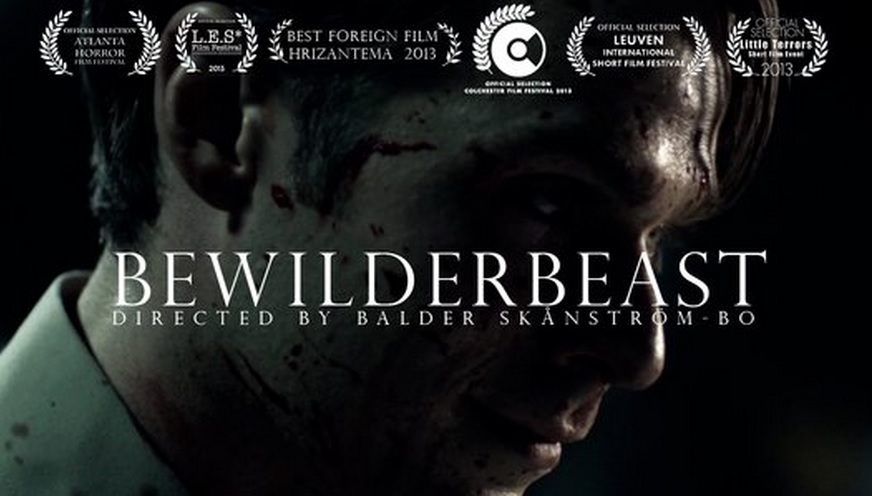 You may have noticed that there has been a slow decline into extreme cinema becoming more mainstream. With the descent into Kick Ass popularity and cult favourites such as Fight Club still being on our highly charged minds, the bloody and brutal genre of a films have become somewhat unoriginal; dumbed down for violence over substance, frights over true gore.

Here, in under twenty five minutes, director Balder Skånstrøm-Bo gives a new and unique take on extreme cinema altogether with the outstanding Bewilderbeast.

Steeped in astonishing cinematography, Bewilderbest is a film about hidden bloodlust and psychopathic behaviour. Mad’s is living the plain white aristocrat life with his girlfriend and her parents. When she falls pregnant, Mad’s is urged to film the inner workings of an anarchic sect that plans on destroying the world in order to rebuild it again.

Skanstrom-Bo delivers an exciting and interesting short film that mirrors the workings of Park Chan-wook and David Fincher. Certainly, the directing and the presentation here are astonishing well done. Astute and attentive, Skanstrom-Bo creates a film that is beautiful and horrific at the same time.

What’s more though, Bewilderbeast is an utterly intelligent piece that does not give into the tropes of predecessors before. In fact, it challenges the themes; setting up stereotypes in order to smash through them. The “protagonist” Mad’s represents an unnerving needs for gore and to complete heinous acts. As we drift through his thoughts to the present, we journey through an almost frustrated killer who balances anger and the urge to kill with his near pristine life. Skanstrom-Bo encapsulates that well but instead of leading us down the same path, he twists and turns through the tale while still manage to splatter a few brains on the floor.

Bewilderbeast is perhaps extreme because it is an exercise in emotions we have all struggled with. What it isn’t is predictable or dull, it is highly intelligent, stylish and Skanstrom-Bo has no doubt kicked off a long and impressive career.