Another Transformers movie you say? I know, I know but yes there is one. Set to storm into US cinemas 27th June and UK release on 10th July, we are pleased to announce the film has it’s first couple of posters. This new narrative tells the story of a mechanic Cade (Mark Wahlberg) and his daughter Tessa (Nicola Peltz) whose quite lives get turned upside down when they make a discovery that brings down Autobots and Decepticons – not to mention the government.

First up it’s Mr. Wahlberg looking rather strapping equipped with some sort of hi-tech space gun in hand. In the background we get a first glimpse of the sheer grander of the robots and aliens we are expecting to see on the big screen. As for his character Cade, he appears to be one protective dad who is ready to take on what is thrown at him.

Up next is newcomer Jack Reynor who you may have seen in Delivery Man playing Shane. The first thing we notice about this guys poster is the slogan across the top: ‘The rules have changed’. This gives us hints towards this being a different take on Transformers and he is the man behind the change, and possibly the eye-candy for Cade’s daughter Tessa. 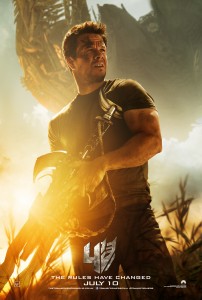 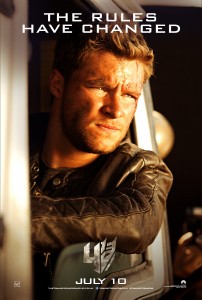