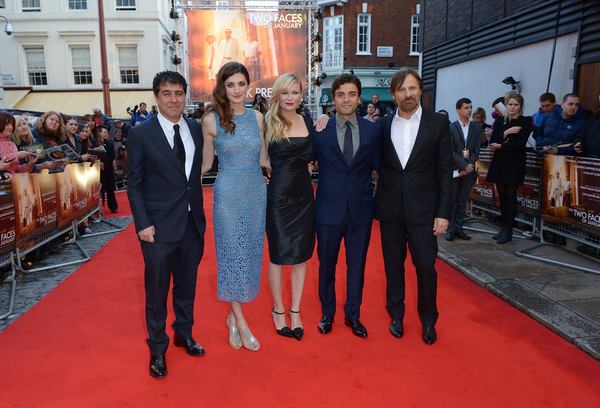 “I found the title to be much more symbolic,” says director and screenwriter Hossein Amini of his new crime drama The Two Faces of January. Adapted from a Patricia Highsmith novel, an author who also penned The Talented Mr Ripley and set in the hot Mediterranean, some may find confusion over the winter feel of the title. “January is the double faced god and I felt that truly reflected the feel of the movie. Especially as the faces are peering away from one another which encompasses the relationship between Chester and Rydal as they fight over Colette.”

These characters Amini is talking about are Chester, Colette and Rydal, played by Viggo Mortensen, Kirsten Dunst and Oscar Isaac. They take pew up in the mezzanine of the Corinthia Hotel, a magnificent posh stay that is nestled in Embankment, London. Though the weather is touch and go, with spots of rain emerging every hour, the cast and director of the film are promoting the thriller which has the back drop of lavish Greece. “It was wonderful filming there though I only got one day off,” Dunst, who plays Colette, says laughing about the bottles of raki the locals would just hand them, “it’s not the worst location when you get to swim in the Mediterranean sea. It was beautiful. “

Of course, the film isn’t about the beauty of Greece and the countries around it. The Two Faces of January is a dynamic tale about secrets, lies and wrought relationships. It centres on Chester and Colette vacationing. Everything is fine until they come across Rydal, a college tour guide who cons rich people out of their money and everything shifts when Chester murders a local politician and the trio are embroiled in the tense and troublesome events. But can they trust each other?

“I have always loved crime dramas,” says Amini, who is tasked with adapting the film from the beloved and acclaimed book. “What I found interesting about this story was that these are three ordinary characters. It is about the damage they do to themselves. It’s a very interesting triangle that shifts the dynamics.”

Amini, whose background was solely in screenwriting, is best known for his work on Drive (“an amazing experience” he says talking about the collaboration with Nicolas Winding Refn.) Transcending from the page, with this sweeping and iconic movie, Amini takes the directors seat for the first time.

“His process is one of the best experiences I’ve ever had,” says Mortensen famed for his roles in Lord of the Rings and A History of Violence. Here he plays Chester, a secretive man who takes Rydal into his murky world. “He got us altogether for a month, month and a half, to talk about the script. We could work out these things before shooting and ask questions about the characters. He was really open to changes that we felt were necessary. It was incredible for a director who has spent twenty years fine tuning his script to open up that process to us. It allowed us to work more smoothly and be more invested.”

“It is definitely more valuable to open up the writing experience” interjects Amini, “While still being respectful to those directors who keep it closed, opening up to writers made my experience better.”

“It’s the most extensive pre-production I’ve ever been on” says Oscar Isaac. You may know Isaac from his stunning performance in the recent (and largely snubbed) Inside Llewyn Davis. You may also know him from his recent casting in the new Star Wars (a casting that prompted “nerdgasms” with his family.) Here he plays Rydal, a con artist who joins Colette and Chester on their vacation “I think the father son relationship is really elaborate. And because of that shady background he has, you never know how far he goes. After all, his father has just died and he didn’t attend the funeral. When he says stuff to Colette about how Chester reminds him of his father, you never know whether he is telling the truth or not. Is he just saying that or is he really going there?”

Working alongside fine (and fine looking) actors, Kirsten Dunst’s job must not have been terrible. “Hey what about me?” she protests causing ripples of laughter to ricochet throughout the room. “Was it horrible working with me?”

The answer is no. Looking beautiful in a black number, ripples of blonde hair and smile firmly planted on her face, as she sits between the bearded Mortensen and fresh faced Isaac, it is clear the actress can hold her own. But what about her character, stuck in a world of murder and crime. “Colette is definitely not innocent, she wouldn’t be with Chester if not. After all, she knows what he does but she turns a blind eye to it. I think in the fifties it is more acceptable but when Rydal comes into the mix, the pair begin to push each other’s buttons.”

The presence of the beautiful Dunst smatters of Hitchcock, famed for his maize coloured hair leads and being “a piece of work,” to them. “But I’ve worked with a few pieces of work in my time so I guess I could handle him. With all the thrills and the set-up, it definitely has a Hitchcockian feel to it. This is Hoss’ (an affectionate nickname for the directors) work so I am happy to buy the Amini blonde.”

It is great to see this enthusiasm for the film, even inciting a round of applause for those in the room. The reason it is wonderful to see is because it has taken Amini twenty years to get it produced, despite the fame of The Talented Mr Ripley,  problem that even Highsmith had when publishing the book. “The publishers specifically said that you can’t have a book with three neurotic people at the centre of it,” explained Mortensen “but funnily enough that’s what people enjoyed about it. It’s messy and embarrassing, you’re like ‘why are you doing these things?’ but it’s brilliant.”

“But you pick up the script and it’s a story that you are invested in straight away,” says Dunst. “With this, you can like it and not have to fake it.”

The stars are truly impassioned about The Two Faces of January which is definitely an intriguing and brilliant thriller. With thank yous and photos, they leave to walk the red carpet. Make sure you check out the film this very 17th of May!

In this article:The Two Faces of January