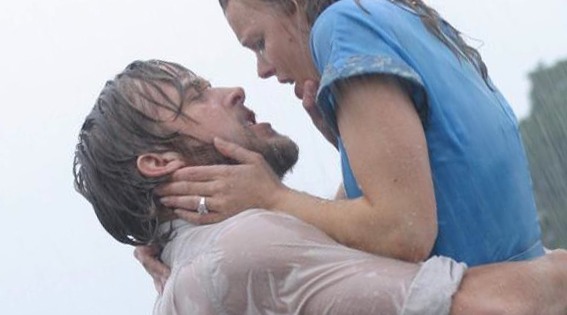 Just as John Paul Young sung in the finale of Baz Lurman‘s excellent 1992 Aussie hit Strictly Ballroom, Love is in the air as we move closer to Valentine’s Day. So it doesn’t matter if you can’t afford that five star restaurant or a dozen red roses, it doesn’t matter if you are spending it with a loved one or going at it on your own, Valentine’s Day is for everyone and there is no reason why anyone shouldn’t indulge themselves with some celluloid romance be it in a darkened cinema or in the comfort of your own home.

If you’re heading to the cinema then you’re in for a treat. Not only is the highly anticipated and Oscar nominated feature Her starring Joaquin Phoenix, Amy Adams and Scarlett Johansson out but so is the hilariously funny Cuban Fury starring Rashida Jones, Chris O’Dowd and Nick Frost. But if you fancy a more traditional love story you can check out Shana Feste‘s Endless Love starring Gabriella Wilde and Alex Pettyfer.

However, if you’re staying home there are literally hundreds of titles worth checking out but to help you we here at Cinema Chords have put together this list of films that has something for all tastes and will serve as perfect viewing this Valentine’s Day .

Nicholas Winding Refn’s Drive stars Ryan Gosling, Carey Mulligan and Bryan Cranston. Wrongfully marketed as a revenge thriller Drive is a truly remarkable crime drama about a man (Gosling) who works in the daytime as a mechanic and stunt-driver for the local film studios but at night he moonlights as a get-a-way for hire. After falling for his next door neighbor Irene (Mulligan), Driver finds himself involved in a robbery gone wrong and takes it upon himself to put things right. Featuring a stunning soundtrack from Cliff Martinez, Drive is a love story that appeals to both genders.

If you’re in the mood for something unique then Yann Samuell’s Love Me If You Dare is worth checking out. Starring Guillaume Canet and Marion Cotillard the film follows two childhood friends who reunite to continue their child hood game of dares which start off sweet but grows bolder with each dare regardless of the harm to others and each-other. A story of love across the generations, Love Me If You Dare echoes the visual style and sweetness of Jean-Pierre Jeunet’s Amélie to deliver a whimsical tale of love and romance that will stay with you for quite some time.

If you’re up for a tear-jerker then we recommend Richard LaGravenese’s P.S. I Love You. Starring Hilary Swank as a young widow, the film follows her character as she discovers that her late husband (Gerard Butler) has left her ten messages intended to help her ease her pain and allow her to start a new life. Superbly acted and full of many heart-warming moments that will make you smile. This film may make you shed a tear or two but it will also build you right back up by the time the end credits roll.

For those that like a little kink for their viewing pleasure we recommend Steven Shainberg’s quirky romantic comedy Secretary. Starring James Spader and Maggie Gyllenhaal the film tells the story of a young woman called Lee whom after being released from hospital gets a job as a secretary to a demanding lawyer only to find their professional relationship turning into an eye-opening sexual relationship. Undeniably touching in a strange way, Secretary is nicely directed by Shainberg’s and is heightened by Steven Fierberg’s stunning cinematography.

If you want something silly that still has a bit of heart to it then Dennis Dugan’s I Now Pronounce You Chuck and Larry is the film for you. Adam Sandler plays Chuck who works as a Brooklyn Firefighter. After having problems changing the beneficiary on his insurance policy Larry enters a domestic partnership, in paper only, with Chuck to secure protection for Larry’s children. But when a city hall representative investigating the validity of their ‘relationship’ the duo pair up to convince as many people as they can that their ‘love’ is real. Very pro-gay with a definite message at its core, the film is heightened by the chemistry between James and Sandler and is filled with plenty of laugh-out-loud moments that will have you smiling.

If anyone fully understood teen agnst then it was John Hughes who portrays this perfectly in his famous teen movie Pretty In Pink. Starring Molly Ringwald, Jon Cryer and Andrew McCarthy, the movie follows Andie, a girl from the wrong side of the train tracks. She has everything against her, she’s unpopular, her dad is an alcoholic and her mother abandoned her when she was a child. So when she gains the attention of one of the most popular guys in school Andie must decide between her childhood friend or the new man in her life. Smartly written and solid performances, Everything about this movie is perfect and is a must for lovers of 80s films.

If you’re not the type to embrace romance or a soppy love story then fear not as there is a truly iconic Valentine’s Day horror movie and we don’t mean the god awful 2001 slasher flick Valentine, no we are referring to the 1981 film My Bloody Valentine. Directed by George Mihalka and starring Paul Kelman, Lori Hallier and Neil Affleck, the film tells the story of an American mining town who find themselves being picked off (pun intended) one-by-one by a masked miner intent on killing those who celebrate Valentine’s Day. Delivering a top-notch thriller that knows how to build up suspence, Mihalka delivers a horror film that has stood the test of time and stands shoulder to shoulder with modern releases.

Moving back to Romance, Richard Linklater’s stella Before trilogy is a seriously incredible series of films and we strongly urge you to seek them out. In the first instalment Before Sunrise we are introduced to a young man (Ethan Hawke) and a young woman (Julie Delpy) who meet on a train in Europe. After spending one evening together surrounded by the beauty of Vienna, the two fall in love and spark off a love that would last for decades. Both Deply and Hawke provide solid performances and leave you believing that love at first sight can truly exist.

Diretor Mick Jackson’s thriller The Bodyguard tells the story of a former Secret Service agent (Kevin Costner) who is appointed responsible for Rachel Marron, a pop singer who has contined to receive death threats from a crazed fan. Nominated for plenty of awards the film is most famous for Houston’s incredible cover of the Dolly Parton classic “I Will Always Love You”. Featuring some very well known Whitney Houston hits to keep fans happy what we have here is a truly engaging thriller and is definitely worth a watch if you haven’t already.

Gosling makes a second appearance in our list except this time he appears alongside Rachel McAdam’s in Nick Cassavetes’ The Notebook. Focusing on an old man reading a story to an old woman in a nursing home, The Notebook follows Allie (McAdams) and Noah (Gosling) who after meeting one evening at a carnival fall in love despite their social differences. After the two are parted the duo find each other again and Allie must choose between her current and her one true love. Based on the novel by Nicholas Sparks The Notebook is considered to be one of the best romance films of recent times and it is for this reason that it makes our list.

There you have it, ten films that we believe suit every taste which will be perfect to check out on Valentine’s Day. But if you are looking for more suggestions we would like to honourably recommend the following films: Ghost, Brokeback Mountain, Shaun of the Dead, Eternal Sunshine of the Spotless Mind, 50 First Dates and All the Boys Love Mandy Lane but to name a few.

What do you think of our list? Do you have any other films that you would recommend at this time of the year? Let us know in the comments section below.