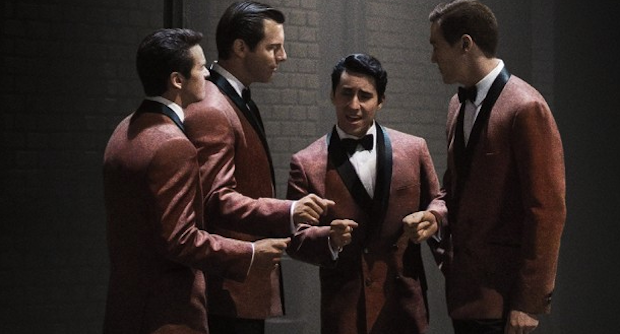 This Friday the ever popular stage production, Jersey Boys takes to the silver screen. With a killer soundtrack, Clint Eastwood directing and already so many fans, it’s safe to say this one will be in high demand. Even after watching the film’s trailer the songs will already stick in your head – never mind after seeing it! With this just round the corner lets have a look at a few films with very entertaining musical moments, shall we?

Up first and one that is very hard to ignore is, of course, Baz Luhrmann‘s Moulin Rouge! I don’t know about yourself but when anyone even mentions the name, I find myself singing ‘Rox-anne…’ in my head uncontrollably. Not only does this have a great narrative, every cast member involved whether they can sing or not threw themselves into this resulting in one hell of a spectacular feature. With the likes of Ewan McGregor, Nicole Kidman, Jim Broadbent and Kylie giving us golden oldies, rock anthems and modern day tunes with such passion it is a hard one to forget.

Next is Jamie Foxx‘s fantastic performance as Ray Charles in Ray. Not only are Ray‘s songs a treat for the ears, Foxx deserved every nomination, award and compliment given for his efforts in this role. Directed by Taylor Hackford, Ray throws us into the hardships of a man who is blind, but also the amazing things one can do if they don’t let their current situations rule them. With Regina King and Kerry Washington acting beside Foxx, they each bring powerful performances, not to mention a true likeness to Charles’ voice. This ’60s fueled film is certainly one to catch if you haven’t already.

Desperately trying to stay away from Disney here, but how can one ignore Julie Andrews? Mary Poppins is a fantastic kids tale with the added bonus of some very nifty songs. ‘Supercalifragilisticexpialidocious’ (yes apparently that is how you spell it) has to be one of the best on screen songs Disney has ever produced. One simply can’t fault Dick Van Dyke‘s awful London accent and dodgy dance moves because, well, it’s Mary Poppins! If you haven’t had the pleasure of seeing this – then I might just have to find a super-nanny to force feed you a spoon full of sugar!

Monty Python‘s The Meaning of Life is equally as worthy to be on list as well. The lyrical genius of John Cleese, Terry Gilliam and Eric Idle have made people cry with laughter for years and The Meaning of Life is no exception.  I mean, ‘Every sperm is sacred’ has to be one of the funniest on screen musical rendition out of all the Python’s – but it is a close call. These filmmakers kept pushing the boundaries and with the cleverly worked soundtrack they could push them even more. Perhaps not the kind of style of music we shall witness in Jersey Boys, but still some terrific performances were given. 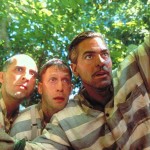 The Coen Brother‘s seem to be loving the musical moments with their recent Inside Lewlyn Davis, but a far more superior film came beforehand – O’ Brother where Art Thou. This film is sheer genius and could probably be classed as their best work. George Clooney, John Turturro and Tim Blake Nelson as escaped prisoners on the run is enough to get bums on seats – but the soundtrack, well that is something to rant and rave about. Actually reaching number 1 in the charts, Clooney proves to be a pretty decent singer. If you are a Coen Brothers fan and haven’t seen this one, you should certainly make the time to see it. O’ Brother Where Art Thou is a highly entertaining film that will have you singing The Soggy Bottom Boys for days after.

With Jersey Boys out in UK cinemas this 20th June we’ll leave you with this exclusive featurette, ‘Meet the Jersey Boys.’