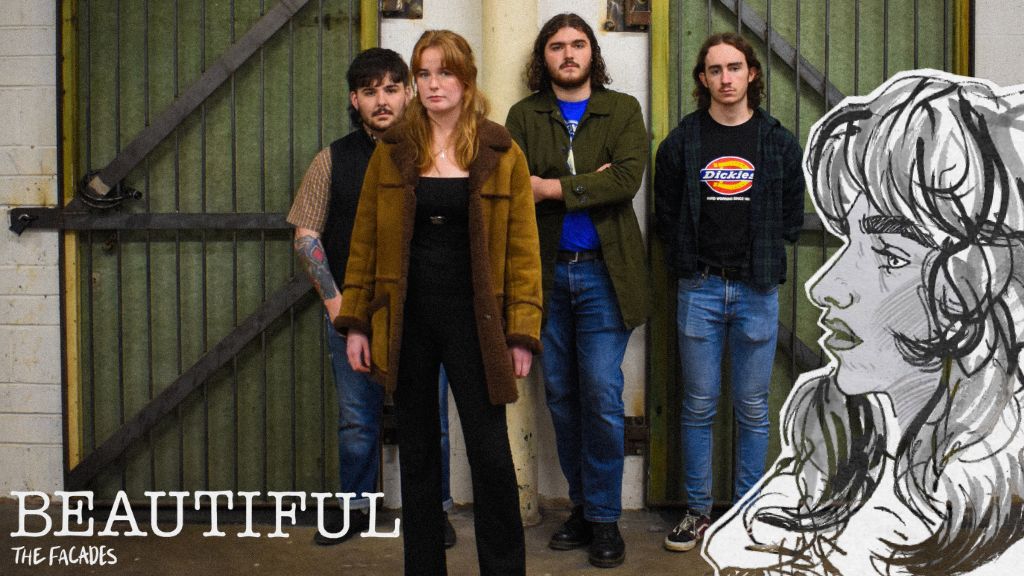 With just three studio releases under their belt, Wigan-based band The Facades have already carved out a name for themselves. Emerging as a new name from the fervent Wigan scene, alongside the likes of The Lathums, Stanleys, Flechettes and The Lilacs, and having earned themselves radio play on BBC Introducing and XS Manchester, shows with Cabbage, The Lottery Winners and Sleeper, and festival sets including the Isle of Wight and Y Not?, the band sets its sights even higher with the November 9th release of “Beautiful,” which marks their first release under the This Feeling Records banner.

Forming just weeks before the first lockdown, and inspired by bands ranging from Wolf Alice to The Coral, Alannah Webb (vocals), Evan Armstrong (guitar), Sam Bowery (bass) and Luke Ashton (drums) began writing individually and remotely, recording demos together before they were finally reunited. The logistic nightmare proved to be a blessing in disguise, especially when their second single, a bedroom-produced demo ‘Don’t Ask’, was aired on BBC Introducing. Since then, they’ve wasted no time performing primarily around the midlands and north-west.

“Beautiful”, produced by Gareth Nuttall (The Lottery Winners, The K’s), instantly sets The Facades apart from the rest of the UK’s alternative scene. Whilst many bands pack a loose, punky punch, The Facades’ love of ragged melody is channelled into a performance of fiery, taut precision.

Commenting on the band’s imminent new release, Webb says, “This song is about sometimes not feeling as beautiful as you are and admiring others for their looks and their self-confidence themselves. A lot of young adults feel inadequate, but feel like they have to keep those feelings hidden. It’s also about the subjectivity of beauty and how women feel it’s necessary to live up to society’s standards, even though it’s impossible to feel good about yourself all the time.”

You can pre-save “Beautiful” HERE.

The Facades’ next gig comes when they headline a 300-capacity homecoming show at Wigan Boulevard on November 11th. Tickets are available HERE.

CinemaChords’ Noteworthy section includes weekly videocast interviews featuring musical talent we hope are either already or, about to become your new favorite artists. You can watch/rewatch all previous episodes via the video playlist below featuring the likes of Turin Brakes, Embrace, The Sherlocks, Stanleys, The K’s, The Native, The Clause, and many more.