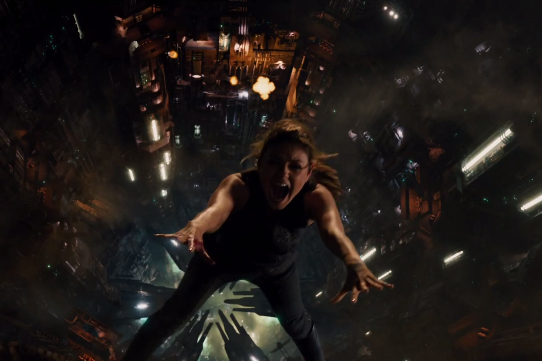 ‘Earth is a very small part is a very large industry’

From the streets of America to star filled galaxies we get the first glimpse of new science fiction epic, Jupiter Ascending. Delivered by the same directors that brought us the cult Matrix trilogy, Lana and Andy Wachowski, Jupiter Ascending comes from good stock. Over the last couple of years the world had gone crazy for anything alternate universe and fantasy driven that it is no wonder Warner Bros has chosen such a topic for their summer blockbuster of 2014.

With shows like Game of Thrones, Man of Steel and the recent Gravity, Warner is not a studio that will shy away from other worlds and indeed special effects. From this initial snippet, we briefly see how stunning the effects appear to be. The trailer shows us Mila Kunis as Jupiter and Channing Tatum as a genetically modified killing machine, Caine at the heart of this story. Sean Bean makes a return to the big screen and the ever talented Eddie Redmayne, fully kitted out in what appears to be futurist, robotic gear are also featured. Ticking all the boxes thus far; even if Magic Mike has transformed into a blonde bearded, pointy eared hunting machine! Like all big box office films we are shown an inevitable love sub-plot which will be incorporated – let’s just hope it isn’t a sloppy clichéd one shall we?

This trailer is enticing, exciting and most importantly is doesn’t give a lot away. With a cast that shouldn’t let us down alongside the Wachowski’s sheer talent, Jupiter Ascending looks like it could be an action-packed success. Release date set for the 25th July 2014, let’s hope there is more footage to come from this potentially great adventure.