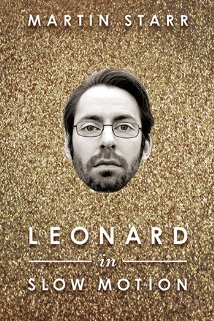 Short films tend to work best when they centre on a quirk. Whether it be life size painted stop animation, a murderous revengeful table or an unusual affliction, the more surreal ploy that you can place on your protagonists shoulders, the more enthralling the stories are going to be. I can say this repeatedly, but that’s why short films are great. They aren’t just testers for your drama or feature, they can tell this weird plots that wouldn’t work on a greater scale because quirks get boring when flogged to death. Which is why Leonard in Slow Motion works best in this engaging format.

Starring Martin Starr – more famed for his role in Knocked Up and Freaks & Geeks – Leonard is a man who unfortunately moves at a snail’s pace. Always one step behind, those around move at a quicker pace and unfortunately, gets to places in life a lot faster. When he finds out the woman he is in love with is relocating to Florida, he goes to drastic lengths to confess his love to her.

Directed by Peter Livolsi – who only has small credits under his belt – Leonard in Slow Motion is a delightful little piece that is light-hearted and visceral. The plight of Leonard is almost felt through the screen and immediately Livolsi ensnares you. Acted impressively by Starr, who has to rely on small facial expressions that slow change to his emotions. To convey what is being said, the pain and anguish of his plight, is truly a magnificent talent from Starr. His lead role is enthralling and beautiful matched to the story.

What works is the special effects elements too. The difficulty of translating someone running unhealthily slothful, surrounded by normally paced people is a tricky visual device to portray. Livolsi sublimely makes it look naturalistic, a sluggish character battling against the faster elements around him in this soft hues of brown, yellow and blue. The effects in place and the brilliance of implementing them into everyday surroundings.

There is also an emotional resonance, especially revolving around the themes that, to be happy, you have to utilise you’re uniqueness and match it to surroundings that fit. Charming, Leonard in Slow Motion is a lazy treat to enjoy.