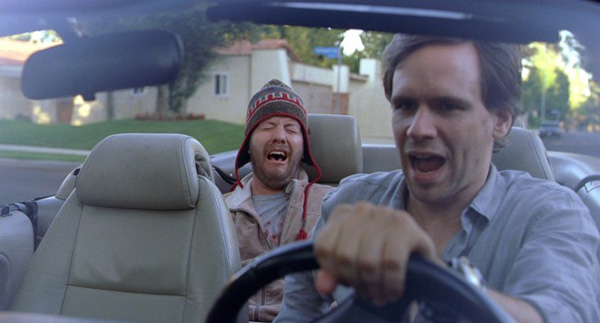 Now recently, I talked about how dark comedies are often wasted because the balance between offensive jokes and sensitive subjects are waylaid, it happened in the recent Grandmother’s Not A Toaster. However, I am pleased to introduce you to the movie where the active equilibrium between what is acceptable, what’s hilarious and what’s downright wrong is so incredible done that you’ll want to devour second helpings. It’s The Hiccup.

After a drug infused night went heinously wrong, Rob and Michael are skipping down and merrily heading to the borders of Mexico to start a life anew. What Michael did, we are never sure but we saw him wake up covered in blood, mumbling about murder and brandishing a Samuari Sword. However, Michael has a good buddy in Rob who is prepared to do anything to stop his friend getting into trouble. And when that anything comes along in the form of Mrs Fransiska, Rob’s devotion is tested to it’s limits.

This is less of a “holy fuck, what are they doing?” (actually, there is a lot of that…) but it’s more about Rob’s relentlessness to protect his friend who, unbeknown to us, could have slaughter an entire village. The hilarity comes from their chemistry as they slip from one outrageous situation to the next. While the acts committed may incite a nervous laughter and cringes, the added commentary from our protagonists is hysterical. Director Matt Smuckler has developed an intense comedy that shouldn’t be as funny as it is. But add the cinematography, two incredible actors and an excellent score that jauntily rolls along the film and The Hiccup becomes humorous, amusing and good be realised as a bigger film more akin to Harold and Kumar and The Hangover.

You can check out The Hiccup at Smuckler’s webpage here.