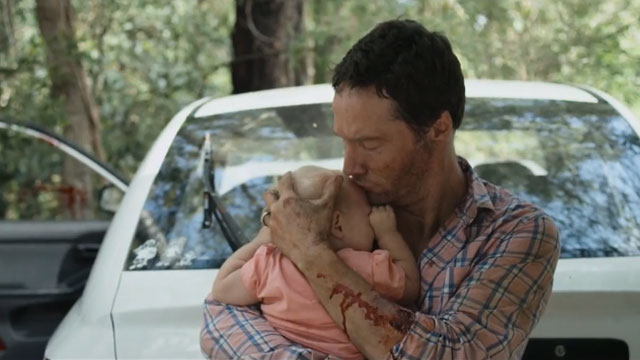 For a truly effective short, there needs to be less blank victims and more of a focus on the human content within. If you have a character who you can empathise with, you have a story that you can follow and as the events transpire, you’ll be shocked to your core. For example, if you like Daryl in The Walking Dead (almost everyone does) then you are going to be more emotional when he is torn apart by zombies. Which is a funny and completely coincidental example to use when comparing it to this amazing Australian short Cargo.

Though the shuffling rotting meat-bags are pretty common pace in cinema nowadays, from shorts to features, it is natural to feel the concept is a little bit tiresome now as yet another monster movie comes out. But Cargo, directed by Ben Howling and Yolanda Ramke, has managed to keep an originality to it that is much fresher than the decomposition we’re used to seeing. The film revolves around a father whose wife has unfortunately succumbed to the zombie curse. His main priority is now his daughter and finding safety for her. This becomes crucial when he is bitten and hasn’t got long to live.

The reason Cargo works so well is that the thrills, spills and bloody bits that are in usual abundance are waylaid for the visceral and emotive centre. Having the crux of the film on the poignant father trying desperately to save his baby girl is utterly captivating. The nuances to this film develop and as he plans to keep her out of harm’s way until he finds a haven, you’ll be wrapped up in his undeniably powerful parental instinct. When you realise what he’s done and how far he has gone to do it, all with his daughter in mind, you’ll have to have a heart of stone to not well up at it.

Unforgettable and moving, Cargo is a phenomenal horror short.