Let’s face it. One of the creepiest characters in any horror movie has got to be the mirror, right?

When someone opens a mirrored cabinet in the bathroom you know you’re inevitably about to jump out of your skin when the cabinet gets closed. The mirror has been widely used in films like A Nightmare on Elm Street and the more recent Mirrors, and this foolproof scare tactic is the concept Blumhouse’s upcoming horror movie, Oculus focuses on.

Based on writer/director, Mike Flanagan’s award winning short film, Oculus follows brother and sister Tim (Brenton Thwaites) and Kaylie (Karen Gillan) whose parents were killed when they were young, Tim was held responsible for the crime and sent to a mental asylum. Obviously, that wasn’t how things really went down and the brother and sister team up to prove that it was really an antique mirror that was to blame, not only for the death of their parents, but also the deaths of everyone who previously owned it.

The first full length trailer has now arrived providing much more plot details than the previous teaser we were treated to. What is interesting in this set up is that the mirror appears to also possess the power to combine past and present worlds. This concept is backed up with a new poster, featuring the younger versions of the lead characters (see below and click on it for a larger version).

Oculus will be reflecting UK fears this 13 June 2014. In the meantime, will leave you with the aforementioned full length trailer: 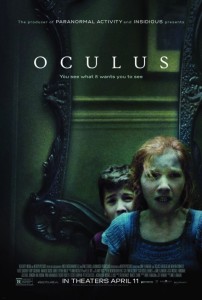