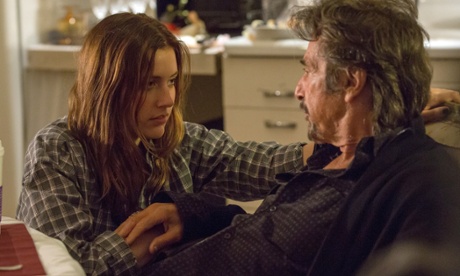 After years of sub-par film roles, Al Pacino is finally ready for a comeback worthy of his talents. Performances in David Gordon Green’s Manglehorn and the comedy Imagine are gaining lots of buzz for the legendary actor, but one of the most promising films on Pacino’s upcoming slate looks set to be The Humbling.

Directed by Barry Levinson (Rain Man), The Humbling stars Pacino as an ageing Broadway star who has a romantic affair with a younger lesbian (Greta Garwig). Parallels between the character and his own life make this an intriguing prospect for Pacino, who’s clearly invested a lot into the project after personally buying the rights himself.

Speaking at the 2014 Venice Film Festival, Pacino has this to say about the role;

“The character is getting older and the feelings he has for his work are becoming less available to him, so he tries to compensate and becomes a little off and confused and slips into a kind of depression that expresses itself in his work.”

This description makes The Humbling sound like it will be a serious drama, but the new trailer suggests that Pacino’s role is far funnier than the outline would lead you to believe. While reviews from the Venice Film Festival have been mixed so far, the promo is hilarious from start to finish and this looks like it could be Pacino’s best performance since he starred in Christopher Nolan’s drama Insomnia way back in 2002.

“There’s a fine line between genius and madness“…

Will this finally be Al Pacino’s big comeback or will The Humbling reach ‘Gigli‘ levels of embarrassment? And what do you think of Pacino’s recent profession of love for Guardians of the Galaxy? Could he find success in a Marvel movie following intimate roles in dramas like The Humbling? Sound off in the comments section below.

The Humbling also stars Charles Grodin, Dianne Wiest, Kyra Sedgwick and Mandy Patinkin. While there is no official release date as of yet, The Humbling will likely hit theaters sometime in 2015.

In this article:al pacino, the humbling