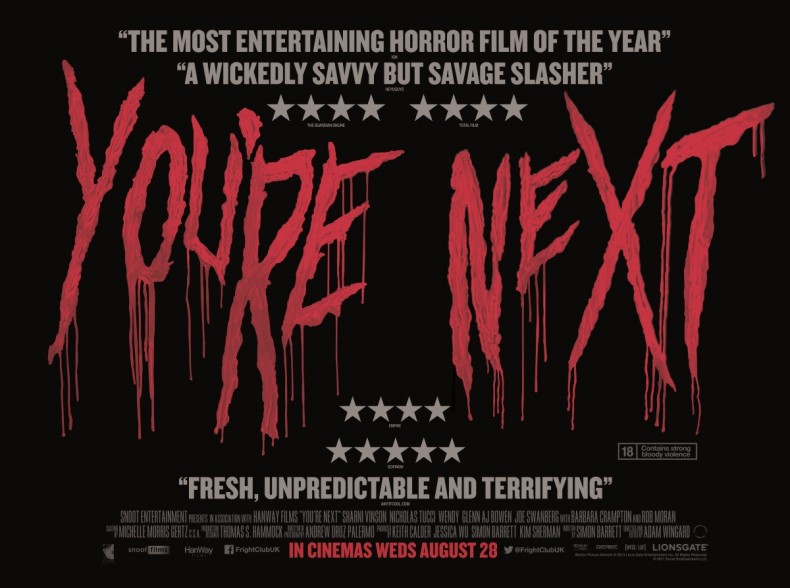 Total Score
You're Next is a brilliant horror and a brilliant piece of entertainment that succeeds in everything it tries, never feeling badly familiar nor too anti-cliché to feel grating, a subverting slasher as severe as it is sensational.

Home invasion is a subgenre so drowned in tropes that it can be hard to invigorate what is usually so typical. Everyone loved Cabin in the Woods last year for how inventive and self-aware it was but this is a much better invigoration of the genre because it takes it slightly more seriously. That’s not to say that it’s played completely straight, without laughs, there are plenty of laughs, but it respects the horror genre while simultaneously mocking it as well as fixing it. It’s the subversion of the subgenre which is intended, having subtext there if you want it, but not relying on it for you to enjoy the film. You’re Next is intended to be a clever, witty, fun horror film, its intentions aren’t only clear but realised, in one of the most gratifying, enjoyable experiences at the cinema this year.

At a gigantic manor in the middle of nowhere, a family is reuniting for the first time in a while, meaning the evenings will be fraught with tension. They play it nicer for their parents’ 35th wedding anniversary to avoid the tension being noticeable or overwhelming. But, as this is a horror film, not everything is going to go smoothly as they expect while the sinister some watch from the windows before launching an all out attack on the family for an inexplicable reason. Masked invaders fire bolts through the window during the family meal time, leading to the family having to defend themselves against strangers.

Many horror films suffer from a lot of typical tropes that writers feel are necessary to include, to add familiarity to the genre perhaps – perhaps it’s laziness too but let’s not be cynical. You’re Next plans to play on those ideas with writer Simon Barrett taking the direction away from a typical woman screaming as the protagonist. Erin (Sharni Vinson) is our female protagonist but she has strength, resilience and is resourceful, instead of the typical screaming, begging wimp that we’ve come to expect. Erin is not the type of character to pick up a kitchen knife then wave it flimsily as tears stream down her whimpering, whining face. Instead she’ll take that knife – or any weapon – and use it lethally. The bar is so low that the sad thing is that this is a feminist horror film.

All is well executed is by the direction of Adam Wingard who balances all of the elements in the film to never lean too far into self-parody to not be serious but not to be laugh free either. It’s that postmodern hybridisation of genres that’s basically inhabited every single film now. With capable hands helming the horror, there will be plenty of gory moments that will make you wince and a few scares to amp it up too – the one from the trailer still works in the film no matter how many times you’ve seen it. There’s an authentic atmosphere attained by Adam’s crafting and an attributed creepiness because of the blood smothered words “YOU’RE NEXT” sending shivers down your spine. Tingling, tickling, teasing words tell of the direction it’s heading in with a sadistic smirk, a raised eyebrow and a gleaming weapon dripping blood.

One of the best parts about this is the casting because it features a lot of familiar faces for film fans that talk about filmmaking, one as a hipster (Ti West) and the other as if commercials are the best thing ever (Joe Swanberg), which is hilarious to watch and would’ve been even funnier if extended a touch. It’s just the fun of seeing two indie directors talk about filmmaking in a way they obviously don’t agree with. The majority of the cast are filmmakers as well as actors. Sharni Vinson is incredible as the rational, strong-willed Erin, putting in a tough performance that sees her having to hold the entire film together that’s usually underappreciated in films – like Mark Wahlberg‘s performance in The Fighter. Another good casting choice is having writer AJ Bowen play Erin’s boyfriend, Crispian, who tries to rise to be as prepared as Erin.

Lionsgate have kept this on the shelf for almost two years after merging with Summit. Lionsgate bought it after its premiere at the Toronto International Film Festival in the Midnight Madness programme. That shows how much faith they have in the movie because with a sudden doubled output, they had to find a weekend to slot this into without it clashing with their other titles. If they didn’t love it as much as they did then they would have released it straight to DVD or VOD much like other titles they acquired but they really wanted a cinematic audience. Kudos to them for that because the cinema experience will definitely heighten the experience; you’ll laugh together, jump together, wince together.

You’re Next is one of the best horror releases of the year, standing shoulder to shoulder with James Wan‘s The Conjuring – which was a huge success. Everything in this is a refreshing take on the subgenre which has suffered from the influx of another subgenre called “torture porn” – which grossly misinterprets the films and is usually a pejorative term. There’s more to violence than a lot of people give credit to, who seem to get offended by blood, it’s all they see in the film and instantly blank any of its merits. You’re Next may have some violent scenes but it is in no way in that class. It offers up blood, laughs and scares plentifully while never distracting too much from the others. You’re Next is a brilliant horror and a brilliant piece of entertainment that succeeds in everything it tries, never feeling badly familiar nor too anti-cliché to feel grating, a subverting slasher as severe as it is sensational.