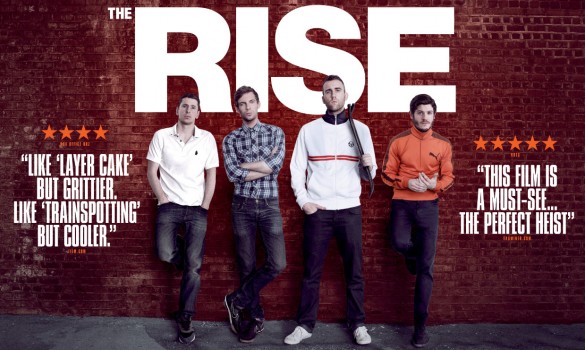 Total Score
For a first attempt it's certainly impressive. The Rise falters at parts, but mostly sticks the landing.

Choosing to make a heist film for your directorial debut is certainly a bold move. With only a humble indie budget, and a somewhat limited pool of talent it could be said the concept might be a little too ambitious. That being said, Rowan Athale‘s The Rise is a more plausible and likely version of the heist movie. In true British style, the film downplays the adrenaline and glamour associated with the potential payout of robbery, and chooses to focus on how little they have to lose or, perhaps more accurately, that they don’t care about losing. An indie heist movie with shades of British realism, a relatively fresh take on the genre if nothing else.

We first see Harvey (Luke Treadaway) in the confines of a bleak, grey police station cell. He begins to tell D.I West (Timothy Spalding) the tall tale of how he ended up there. The story starts with Harvey being released from prison 6 weeks earlier, when local gangster Stephen Roper framed him by planting heroin in his apartment. As revenge, Harvey and three of his closest comrades plan to rob a working mens club known as The Rise which Stephen’s ‘security’ firm protects. The lingering question is whether Harvey, Dempsey (Iwan Rheon), Dodd (Matthew Lewis) and Charlie (Gerard Kearns) have enough grit to pull it off.

When you have a central character like Harvey, who the supporting characters rally around, as well the love interest, he needs to be charismatic. He needs to be charmin and we need to see why these people believe in him. Harvey or, more aptly, Luke Treadway doesn’t manage this. His character his understated, undistinguished and not particularly likeable. I felt Dempsey and Dodd stole the show with their personality, and much needed comic relief banter. It’s hard to get stuck into a story when you don’t empathise or even like the person telling it.

I felt that was a major hindrance to the film’s pace, which was fairly slow to build tension, anyway. That being said, when the story did finally kick into 4th gear in the last 40 minutes or so, the conclusion did deliver although I did think at one point, ‘why would the story be worth telling if they didn’t succeed?’ which slightly derails the logic. Minor criticisms in the story aside, it did feel rather well made for an indie film. The cinematography in particular was rather smooth, and fluid. For a first attempt it’s certainly impressive, and I’d be surprised if I didn’t see a follow-up from Rowan Athale soon. Overall, The Rise falters at parts, but mostly sticks the landing. For fans of heist movies, or British cinema in general I’d definitely recommend it.

The Rise is released on DVD and Blu-ray this 30th of December.

Sam Thorne is a freelance film journalist, critic, feature writer, and news writer. His speciality is primarily anything psychological, edgy, or dark. Sam writes for a variety of internet publications. Also a Film and TV Studies BA Student..
You may also like
DVD