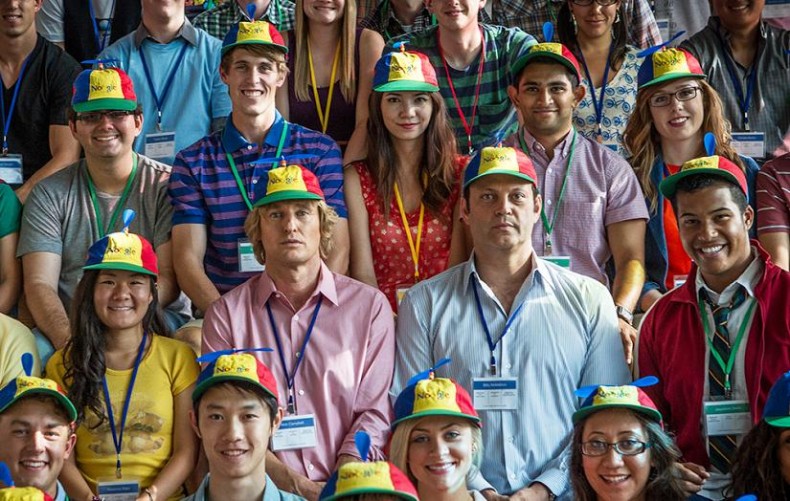 Total Score
Is it funny? Sporadically. Is it surprising? Never. Is it memorable? Absolutely not. In other words, wait and catch it on cable if you've nothing else to do - unless of course you want to see a running gag about a mommy-coddled Chinese kid repeatedly ejaculate over a lap dancer.

You’ve seen The Internship. ‘What?’ I hear you say. ‘Of course I haven’t, it’s just been released’ you reply. No. Trust me. You *have* seen The Internship. You’ve watched a movie with Vince Vaughn, right? Or Owen Wilson? You’ve seen a fair share of the bromantic Hollywood comedies the Apatow stable have made de rigour over the last 15 years? Yeah? Sure you have! Then, I guarantee, you’ve seen The Internship. It just had a different name, with an interchangeable set of locations and a slightly alternate concept. As a result, director Shawn Levy serves up a now traditional Hollywood buddy comedy that offers nothing different to what you’ve seen numerous times before. Yet… don’t begrudge it because the job it does it does with absolute workmanlike ease. This is a well-oiled comic machine that knows just what beats to hit. A comedy for people who, well… haven’t seen that much comedy!

So, the checklist. Vaughn & Wilson, they play amiable, loveable losers right? Absolutely. In this case Billy McMahon & Nick Campbell, a pair of charming, smart-mouthed salesmen who find themselves surplus to oafish businessman John Goodman‘s requirements (he seems to be cropping up in an awful lot of shouty, non-roles these days doesn’t he?). Vaughn’s Billy is about to have his home foreclosed and his rather hot partner is ready to leave him, even though she loves him (though I wouldn’t worry, this is only mentioned once); while Nick is forced to take a demeaning job as a bed salesman for his sister’s repugnant boyfriend (Will Ferrell, slumming it frankly). And then, in a moment of breathtakingly strange clarity… Billy decides to Google ‘google’ and instead of reality imploding, he and Nick get the idea of becoming Google interns. Which leads to, inevitably, the comic genius of two middle-aged hipsters trying to outsmart and ingratiate themselves with a bunch of smarter, hipper young things – only to become part of the dunces team filled with bright, dysfunctional losers they have to build into a team capable of winning the respect of Aasif Mandvi’s rule-book drill sergeant and Max Minghella’s unbelievably odious ‘rent a Brit w*nker’ Graham, not to mention Nick winning the heart of Rose Byrne’s icy Google worker (though it’s nice to hear her using her traditional Aussie brogue). I’m not going to spoil the film by telling you whether they succeed or not, but… if you don’t guess the answer within the first 20 minutes, I suspect your frontal cranial lobotomy was a success.

It sounds like I really disliked The Internship. I didn’t. Honestly. I thought it was perfectly charming entertainment, helped by the fact Vaughn and Wilson have an easy chemistry we first saw in (the much better) Wedding Crashers, and y’know… it’s all just quite nice. And it at least is trying to fashion humour out of the modern technological landscape we’re all playing in these days, rather than just mining endless barrels of low-grade Porky’s humour (fear not though, this dabbles in that in places too). I appreciated the effort by Levy & co., and I had no real problem spending a couple of hours with all these people. But, is it funny? Sporadically. Is it surprising? Never. Is it memorable? Absolutely not. In other words, wait and catch it on cable if you’ve nothing else to do – unless of course you want to see a running gag about a mommy-coddled Chinese kid repeatedly ejaculate over a lap dancer. Your choice…