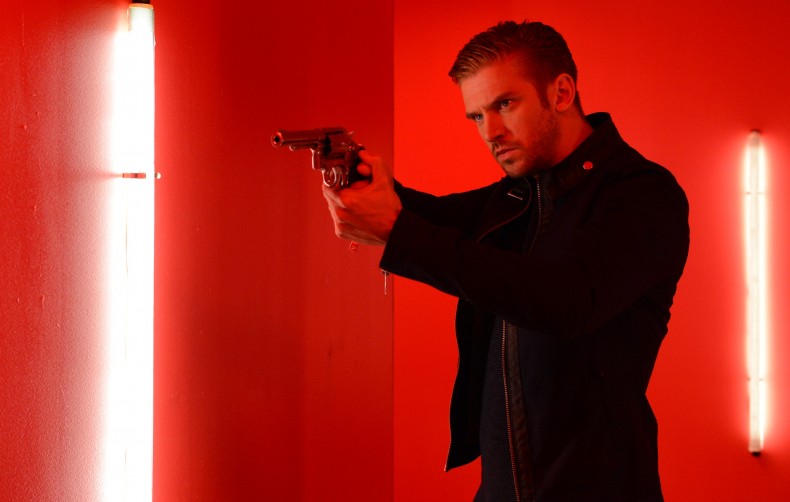 Dan Stevens commands the film, Simon Barrett's script is nearly flawless and Adam Wingard's direction blends humour and charm with a brutal edge.
The third act becomes a typically generic denouement.
Total Score
Few films and directors can handle the mix of charm, brutality and humour that The Guest represents, and few films this year will have the impact on audiences that The Guest has.

The Guest is the next journey for director Adam Wingard, a director who, in his relatively short career, has embraced horror with verve and inventiveness. From his directorial debut Home Sick to his V/H/S segments and last year’s You’re Next (originally made in 2011), Wingard has an edge to his work that is set to develop further. The Guest marks that development with enthusiasm, it is not a horror film, it is a pure thriller. A thriller that embraces the genre­ with a nod and a wink to everything that has come before to create probably one of the quirkiest and dark films of the year.

Downton Abbey‘s Dan Stevens is David, a recently discharged soldier who one day imposes himself upon the doorstep of the Peterson family. A family in turmoil, the mother Laura (Kelley) is battling with the death of her son in Afghanistan, the father Spencer (Leland Orser) has work problems. Daughter Anna (Maika Monroe) is slaving her life at a diner to save to go to college whilst youngest son Luke (Brenden Meyer) suffers at the hand of merciless bullies. The moment their doorbell rings and Laura is met by the recently discharged David, the world they know changes. His piercing blue eyes and effortless charm brings balance and peace to the family as they welcome him into their home. David gains the trust of the Peterson family until a series of incidents become inextricably linked to him.

From the moment Stevens’s David rings the doorbell, he commands the film. His steely blue eyes, affecting smile and suitably charming demeanour wins the audience as he does the family. His performance is miraculous, switching faultlessly between charming, funny and ferocious; Stevens brings character and likeability to the screen in what could essentially be a dry role. Even when he brutally beats up teenage bullies or blowing a diner full of people up, he’s still irrepressibly charming and funny. The rest of the cast are equally great, Monroe and Meyer are solid as the youngest siblings of the Peterson family. Great supporting actor Leland Orser is brilliant as the mild alcoholic patriarch whilst Sheila Kelley imparts a motherly warmth and love onto David that is truly palpable. Turning up in supporting roles is the always good Joel David Moore, The Wire‘s Lance Reddick and Empire Record‘s Ethan Embry in a minor cameo.

Aside from the cast, The Guest exceeds expectation whilst retaining a very particular feel to it, a feel of familiarity, audiences know they have seen films of this type before but never really like this. Wingard frames The Guest with measured assurance, whilst drawing effectively from genre films from the ’80s and infusing it with a great soundtrack and superb synth score from Stephen Moore. Wingard creates an amazing visual platform and then Stevens elevates The Guest to, at times, greatness. In the hands of others, The Guest could quite easily have been another 12A by the numbers action thriller but Wingard injects the film with a brutal edge that’s perfectly punctuated with moments of genuine humour, shock and not so subtle homage. However, The Guest loses its way leading in to the final act as the military arrive to apprehend David, the film shifts towards a more typically generic denouement.

As soon as Reddick’s Carver and his rent-a-goons arrive the film’s tone shifts as does David, and not entirely for the better. The siege upon the Peterson house, does afford Stevens some cool flying through the air in slow-motion moments but the action is stifled and the editing awkwardly, though almost undoubtedly on purpose, reminiscent of something that wouldn’t be out of place in The A-Team. It is this part of the script that ultimately lets the film down because up until this point, Simon Barrett‘s work is flawless. The military aspect and plot directions at this juncture are too obvious, even for homage or deconstruction, thankfully Barrett’s quality dialogue still remains. Still, despite this falter, Wingard still manages to maintain the pace, humour and tension into the final showdown in a Hallowe’en themed community centre.

The Guest has an assured confidence that is brilliantly epitomised in Stevens’s performance and Wingard’s knowing direction. Hampered slightly by a derivative plot and faltering final act, The Guest still has plenty to enjoy, and a brutal edge that is often dismissed in this era in favour for a more friendly 12A certificate. Whilst there will be comparisons to Drive, the loner lead and the synth score,  Wingard’s The Guest is better than that. It is not a film to draw comparison, it is its own beast. Few films and directors can handle the mix of charm, brutality and humour that The Guest represents, and few films this year will have the impact on audiences that The Guest has.

A film geek from an early age, Paul is film graduate and one time short film-maker and Industry Mole. Though he has had a break from writing, it has always been his passion and he's finally adding the finishing touches to his first full length script. Paul is also the proud owner of what can be described as an obscenely large film collection. You can follow Paul on Twitter @JustCallMeFurry.
You may also like
CinemaReviews