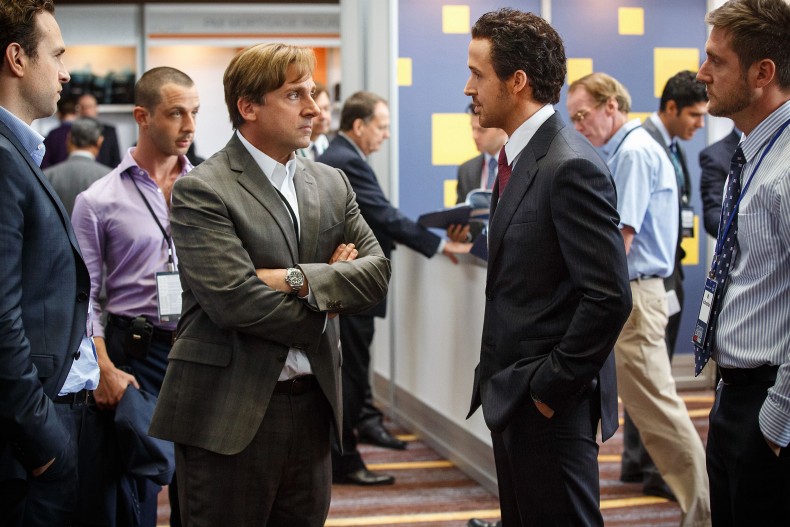 Content is its strength, as well as using absurdism to accentuate the tragic reality of the situation. Performances are strong all round, but the standout is Adam McKay's direction that is stylish, aware and has plenty to dissect.
Some characters are a little thin to make way for information in the narrative.
Total Score
At the heart of it, The Big Short is not pure cinema but it is a terrific film due to its entertainment value and, more importantly, its content. Through its documentary-esque narrative, it transforms into a film all about its message and content while still managing to explore characters and the themes that trouble them. If you don't understand what's going on, it's because you're not trying to - it's not the film's fault.

What do you do when you want to make a documentary about the financial crisis, but want everyone to see it? Cast stars like Steve Carell, Brad Pitt, Ryan Gosling and Christian Bale to tell the story instead. Then what do you do when you’re afraid some may not understand the financial jargon? Recruit celebrity cameos to break the fourth wall with simple illustrations of what it all means like Selena Gomez and Dr Richard Thaler to explain synthetic CDOs and Margot Robbie in a bubble bath with champagne to simplify the unnecessary jargon of a sub-prime mortgage. That is where the brilliance of The Big Short comes into play: it doesn’t talk down to you, it tells you that the banks overcomplicate things to perplex you into accepting ridiculous things. Another accomplishment is that it doesn’t treat the audience like idiots, it lets you think for yourselves and if you don’t understand what’s going on, you’re not trying to.

With the sad “Based on a true story” coming up on the screen, what follows is the sad truth about three different groups of people began to notice a housing market bubble and, in no uncertain terms, bet (or short, the banking term) against the banks. By doing so, these independent thinkers punish the banks for their greed, lack of foresight and complete disregard for the global economy to ensure they achieve their absurd multi-million bonuses despite causing a global financial crash. There is clear structural issues in the system that caused such a collapse, but it’s the people in the situations that exploit it for their personal greed. Little White Lies put forward a great case about financial crisis films being about male impotence and explore the fallacy of masculinity.

Many may be surprised that the sentence “the Academy Award nominated director of Talladega Nights” (not a bad film, by-the-by) is now factually correct, but the direction by Adam McKay is actually brilliant. McKay may not have had that noticeable a director’s style beforehand unless you really studied him, but The Big Short is filled with directorial flair that points to an interesting future filmography. The style isn’t redundant, it maximises the potential of the film with freeze frames, stock footage and finger-pointing at pop culture as a distraction tactic. Freeze frames perk up in vital moments because you need more than a moment to let the truth sink in and to remember the faces of the crisis. The stock footage from real people losing their homes and real bankers is edited in sporadically as well as random inserts of needless information that we still remember – Britney Spears’s empty comments at a Crossroads junket, Funny or Die‘s toddler landlord sketch and more. More than that, the film uses covers of famous pop songs perhaps as a critical commentary of how we’re inundated and infatuated with pop culture to test our allegiance to the truth on display or to guess who is performing the cover.

The creation of the piece is highlighted several times as characters breaking the fourth wall without those around them acknowledging it. This is accentuated further with its adoption of a mockumentary visual style and, although there are characters breaking the fourth wall, that is their only time recognising a camera. Its mockumentary style creates an absurdist, darkly comic tone to really hammer home the tragic reality of the situation. Time and time again, Ryan Gosling’s Jared Vennett tells us that this did really happen and isn’t a dramatic tool – its honesty stretches the other way to tell us how two characters find out about the situation is not true, but a nice convenient plot point. Performances are universally strong, specifically Carell who is great at making tragedy out of comedy, but two shining lights emerge in John Magaro and Finn Whitlock who manage to portray their happiness and hollowness at their ideas without skipping a beat.

At the heart of it, The Big Short is not pure cinema but it is a terrific film due to its entertainment value and, more importantly, its content. Through its documentary-esque narrative, it transforms into a film all about its message and content while still managing to explore characters and the themes that trouble them. What is it to be selfless? Is there such a thing? By capitalising on the bank’s greed and punishing them, they essentially profit off the tragedy of the working class that paid the price. How do you cope with that? Is it unethical, ethical? Should they have or could they have done more to prevent or at least warn people? The film itself leaves a lot of questions, but one cannot come out of it agreeing with conservative economic strategies that created such a worldwide tragedy. Scariest part? It looks like it’s happening again.