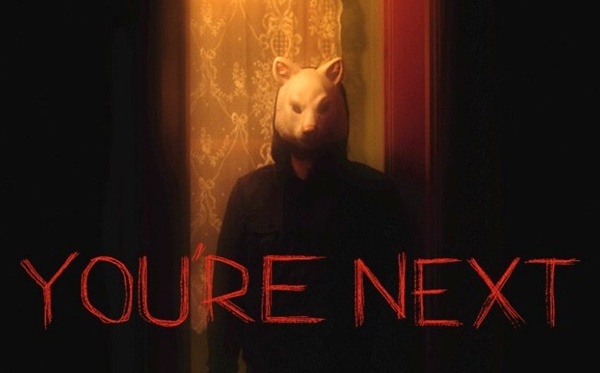 Total Score
Some terrible acting and a desire to be taken seriously really lets this seen-it-all-a-hundred-times-before horror movie down.

“Let’s make a horror film. What will we need?”

“Lots of gore and horrific deaths.”

“A tough heroine who peskily refuses to die in spite of the odds being stacked against her.”

“A heavy sense of irony.”

And so You’re Next was made. For the first twenty minutes you try to figure out whether this is a joke. Any film that launches straight into bad sex between a young, attractive girl and a middle aged slob must be a joke, right? And when they both, inevitably, come to a gruesome end just a couple of minutes later you’re positive that this is a joke. Only this isn’t a joke. This is serious and the film is all the worse for it.

The story proper starts with the mega rich parents of a dysfunctional family driving to their new country pile for a get together to celebrate their wedding anniversary. They are mega rich and mega dull. Fortunately their progeny and their respective partners are slightly more interesting, in particular Erin, the ballsy (see where this is going?) antipodean girlfriend of bearded Crispian. Soon everyone is together and with a house full of dullards and obnoxious rich kids (other than Erin. Really, you must be able to see where this is going) you are practically begging for the killing to begin. You see, another one of the big problems with You’re Next is that most of the characters are so unlikeable you find yourself rooting for the bad guy.

Fortunately for the audience the party guests soon find themselves trapped in the house surrounded by a group of psychotic men in masks. Yes, one has a sheep mask – the other two are a fox and a tiger. Although, in fairness, they are actually quite scary. One of the only ewe-nique points in an otherwise cliché filled film. Sorry.

There is blood galore, including a surprise garrotting, and quite a few genuine jump-out-of-your-seat moments so, on that level certainly, You’re Next is an effective horror movie. Unfortunately, as previously mentioned, it just takes itself too seriously and it really isn’t good enough to be taken seriously. Some of the cheesy dialogue, such as emerging heroine Erin explaining why she is acting so calmly about the situation the house finds itself in (“I grew up on a survivalist compound.” Obviously) would have been much better received if they’d been delivered with a nod and a wink.

The dialogue is clunky and the acting ranges from dreadful to barely passable in a film that could have been saved had it had the self-awareness of, say, Scream. There is some comic relief in the form of eldest brother Drake, who puts you in mind of a forty year old Steve Stifler only with less charm. Unfortunately his much needed one liners are underutilised.

Erin (played by former Home and Away actress Sharni Vinson) is the main focus of the film and by the end you do almost want her to make it – on the proviso that no one else survives with her. There is a twist at the end that Ray Charles could have seen coming although the final scene itself is nicely done even if it does make you realise that this could have been so much better.