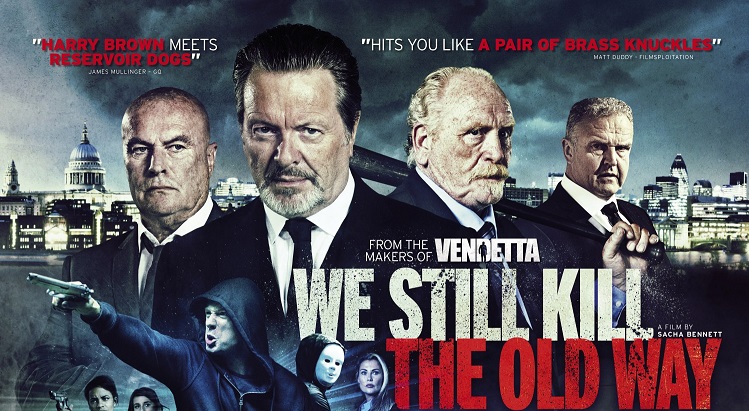 Its protagonists are full of charm. Doesn't fall into the uber-violent pitfalls of similar products (I'm looking at you, Outlaw). A sharp 90 minutes.
Its antagonists are so awful, they're actually difficult to watch. Some editing mishaps. The police are useless.
Total Score
Worth a watch by any crime and gangster film fan.

The revenge thriller is a genre all too prone to exploitation and nastiness. What a relief, then, that We Still Kill the Old Way is full of wit, charisma and even some restraint. While there’s plenty of violence, it’s curiously bloodless, and while the film dwells on some nasty topics, it never stays on them for long.

In a nutshell, We Still Kill The Old Way is about old style East End gangsters getting revenge when one of their own is killed by the new breed of thugs with mobile phones. The characterisation is simple, and one of binary opposites – the old versus the new, ‘class’ versus vulgarity, suits versus hoodies. The opening segment sets this up, cutting between Charlie Archer (Ian Ogilvy) and Aaron, the leader of a gang called E2 (Danny-Boy Hatchard). This opening also reveals one of the film’s main problems though; if there’s such a thing as being too evil, then the film’s villains certainly fit. Aaron and his ‘boys’ are so crass, so disrespectful, that it’s a displeasure to spend any time with them at all. Knowing it was a revenge thriller, I just wanted Charlie and his men to dispose of the toe rags as soon as possible.

When they eventually do, it’s with style. The rest of Charlie’s old gang are played by an assortment of veteran actors like James Cosmo (Braveheart) and Chris Ellison (The Bill). The men crack wise about the past, even when they’re torturing those who made the mistake of disrespecting them. But a lot of the violence is often played for comedy, leading to rather a different from product from what’s suggested by the blurb or the DVD cover.

This is the film’s biggest strength: to transcend its well-tread origins and offer something stylish, well-paced and funny. There are a few other minor quibbles, like a tacked-on romance plot, and some editing mishaps – in one particular scene set in a bar, the camera goes round and round in circles around the actors when it should probably have just stayed still – but overall We Still Kill The Old Way is worth a watch by anyone fond of gangster/crime thrillers.

Always fascinated by films throughout his childhood, Stuart is now certain he wants to write about them. He has a particular fondness for the 70s American cinema he was introduced to throughout his time at the University of Winchester, at which he studied English. He blogs at https://afairjudgementdeserved.wordpress.com/
You may also like
DVDReviews