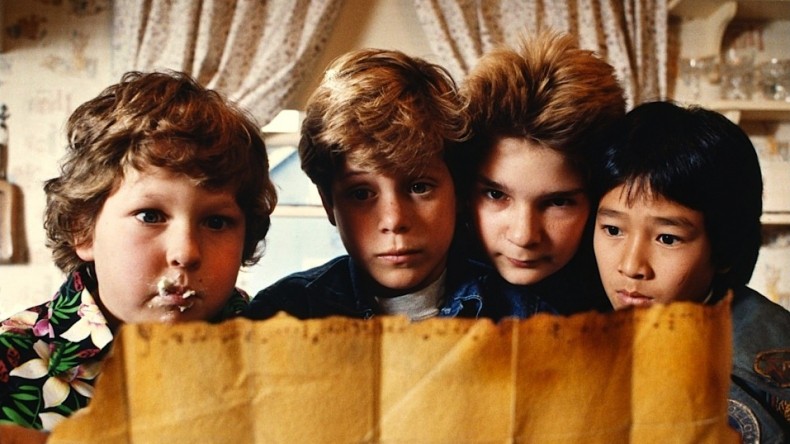 Everything.
None.
Total Score
30 years later and Richard Donner's kiddie classic The Goonies is certainly good enough for me!

The Goonies fuelled my childhood sense of adventure for many years. Now thirty years later, the same movie still holds pride of place in my heart and remains a firm favourite of mine making me jealous that I never once got to ride that waterslide…

Admittedly it has been a number of years since I last took an adventure with Mikey, Data, Mouth and the rest of the team through the underground caves of the Goon docks. So imagine how thrilled I was to check out the 30th Anniversary Edition of one of my childhood favourites gloriously presented on BluRay, it was pure nostalgia and no matter how cliche this sounds, it was like watching the film for the first time again.

The Goonies tells the story of Mikey and Brandon, two brothers whose family is preparing to move because their home is going to be destroyed by developers to make way for a new golf course. After Mikey and Brandon discover a treasure map hiding in their attic they team up with their friends Chunk, Mouth, Andy, Stef and Data to find the treasure in an attempt to save their neighbourhood from destruction. As they near the entrance to the caves leading to the treasure, the friends encounter the hideout of the Fratelli brothers who pursue the kids through the boobytrapped path into the caves and will stop at nothing to steal the gold.

Everything about this film is wonderful. Richard Donner’s fast-paced direction perfectly captures the thrilling action sequences with finesse and style which should come as no surprise as he gave the world Superman. He certainly knows how to craft a classic and even thirty years later, The Goonies stands shoulders above modern family orientated action films being released today.

Even the acting in this film still remains fun and entertaining. Sean Astin (known to most for his role as Sam Gamgee in The Lord of the Rings trilogy) does a great job in leading the film and the contrasts between his character and his on-screen brother Brandon played by Josh Brolin brings a nice shifting dynamic to the film. The remainder of the cast including Corey Feldman, Jeff Cohen, Jonathan Ke Quan, Martha Plympton and Kerri Green are equally as sound together on screen and their friendship both on and off screen feels wholly natural and realistic making the sense of adventure that much better.

Rounding off the cast are Anne Ramsey, Joe Pantoliano, Robert Davi and John Mutuszak. Davi and Pantoliano play Jake and Francis Fratelli whom despite being clearly dangerous have a surprisingly entertainging aptitute for slapstick comedy perfectly fitting the overall lighter tone of the film. Ramsey does a great job as the mobster mother who will do anything for her boys but my favourite character in the entire film is without a doubt Sloth. A ‘monster’ with a heart of gold, Sloth is the main hero of the film and Mutuszak’s performance is just wonderful. He’s menacing, hilarious, scary and endearing all at the same time.

Lastly the effects employed, are largely practical and have really stood the test of time. Sure there are a few obvious green screen moments but unlike other films these moments don’t take away from the enjoyment of the film but they do in someway instill a sense of nostalgia about 80s filmmaking. Speaking of the effects there are some set pieces here which wowed me as a child becuase of their sense of adventure and now as an adult continue to wow me but for completely different reasons. For example the waterslide scene, the first booby trap, the big reveal at the end etc It is clear that plenty of work was done behind the scenes to carefully pull off each thrilling scene and as such I have even more respect for Donner and his team for pulling off such a feat.

So yes, I give this film a massive Truffle Shuffle in approval of how truly awesome it is. Overall I had a blast and strongly urge you all to splurge out on the 30th Anniversary Edition as the added extras will make all those childhood wonderments come flooding back. The Goonies R Good Enough and here to stay for years to come.