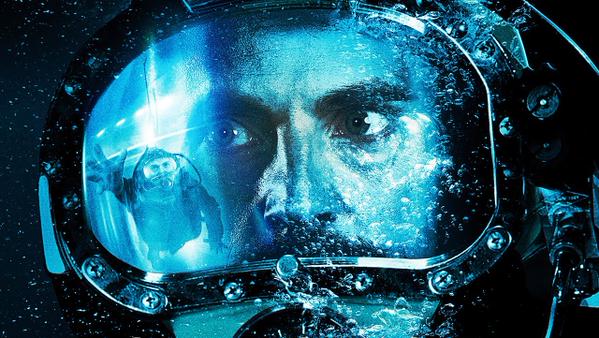 Exquisite and artistic shots enhance this disastrous situation these men find themselves in.
Sadly, this doesn’t offer anything new when it comes to story-telling in confined spaces.
Total Score
Above all, Pressure achieves what it says on the tin, only to be bombarded with predictable clichés and sickening dialogue.

Scuba diving is fascinating. Exploring the depths of the unknown, the peacefulness of being alone in such a vast expanse of water becomes overwhelming and at times quite daunting. Choosing to dive recreationally doesn’t exactly come with the same risks as the high volume of deep sea divers that ensure our oil pipelines are in check. Pressure, well and truly drags us down under and traps us with the stories of four, very different men stuck on the seabed after becoming detached from their ship during a treacherous storm.

In quick, concise succession we are introduced to our main characters. As you’d expect, perfectly flawed and troubled in their own ways and already focusing on the bigger picture – getting home, or at least back on the main ship. Lead by a very determined, by the book Matthew Goode as Mitchell, it’s not long before we can predict exactly what is going to happen. A kid, whose never dived more than 3 meters before, a borderline alcoholic whose hands are so damaged from diving and a really grumpy guss all have to take it on the chin and team up in an attempt to get themselves out of this life or death situation. It’s apparent that the filmmakers wanted to make this an in depth (literally) character exploration, yet any ounce of this becomes lost in generic and cliched scenarios that only Hollywood finds itself in.

Initially, Pressure shows great promise. The realism of this situation is all consuming. It’s something that could happen and the thought leaves you feeling empty and lost. Choosing to set a whole film in one location is a bold choice, one that works if you have the story to carry it, albeit Pressure’s pacing is as up and down as this pods oxygen levels that any sort of tension and mystery is swept away in a time lapse. As we are swept into this devastating situation just as fast as our lead characters are, it leaves us feeling virtually no empathy as it reaches it’s climax. That aside, Goode, Huston and Pinky Blinders Joe Cole did the best they could with their run-of-the-mill stock characters that are in virtually everything we see today.

Where Pressure really proved itself, was it’s exquisite and artistic visuals. One can not fault how breath-taking and awe-consuming this film looks. At no point did they attempt something silly and the pod be swallowed by a whale, nor did they try and make light of this devastating scenario, At times, the men experience air-deprived, quite terrifying flashbacks and hallucinations that are simply beautiful, but morbid accentuating the fact that these guys really are out of luck.

An engrossing film to a certain extent, albeit Pressure is lacking in both emotion and tension that such films as Abyss and Black Sea embodies. At times, you become consumed by what you see and gasp at moments you’d hope not even to find in your nightmares. Above all, Pressure achieves what it says on the tin, only to be bombarded with predictable clichés and sickening dialogue.