Me and My Mates vs. The Zombie Apocalypse ReviewJessy Williams
05

Me and My Mates vs. The Zombie Apocalypse Review 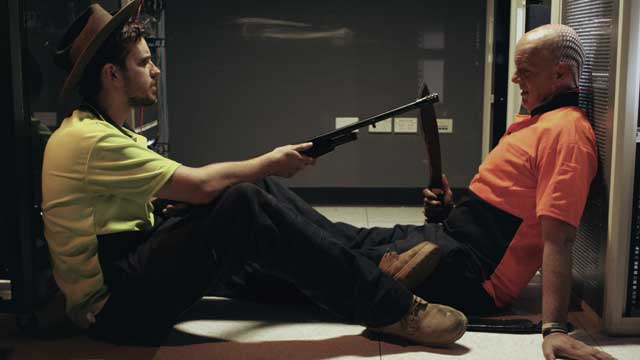 It ended.
Devoid of laughs, scares and any ounce of intelligence, it's an offensive and ludicrous attempt at creating a horror-comedy. A lazy script and set of characters pushes Me and My Mates Vs. The Zombie Apocalypse to the bottom of the zomedy barrel.
Total Score
A one-trick pony that relies on swearing and sex jokes to secure laughs; may garner a giggle if you're a bit drunk.

A group of people are trapped in a telephone exchange during the zombie apocalypse. As they struggle to contact the military, they must decide whether to wait for everything to blow over, or make a dash for safety elsewhere.

Oh zombie comedies. It’s a sub-genre of horror that I have a love-hate relationship with, because they are just so difficult to get right. At times they soar above the heights of the films they are poking fun at as they embrace an intelligent, yet playful tone and pay homage to the zombie films that have passed. Other times, however, they crash and burn at the feet of the great zombie films like Dawn of the Dead, Night of the Living Dead etc. and reduce themselves to dire comedies filled with sexist, racist and crude humour, without an ounce of intellect. Me and My Mates Vs. The Zombie Apocalypse, sadly, sits firmly in the latter description.

As soon as this starts, you’ll know exactly what type of film this is. It’s the kind of film that sees swearing as a sure means of garnering laughs. If you can incorporate sex, drugs and/or alcohol in to the mix as well, then you’re in for a winner. Unfortunately, unless you’re under the age of 16 you’re not going to find a lot of this funny. At all. This immature tone that the film instantly chooses to adopt is maintained, so if you’re impressed by the film now, you’re still going to love it by the time it ends.

The main problem with Me and My Mates Vs. The Zombie Apocalypse is that chooses to do nothing new with its concept. The characters that we are lauded with are about as original as the film’s quirky title and become increasingly painful as the film goes on. The amount of misogynistic and sexist remarks that come out of Darryl’s (Alex Williamson) mouth is astounding. By placing him as the film’s protagonist is insulting, because audiences deserve better than a character who has the intelligence of an insect and the vocabulary of an adolescent.

For a film set around a zombie apocalypse, it is lacking in undead action. The couple of gory moments we are given are mostly great and I did chuckle as Darryl tried to prove himself as a macho man, but these moments are fleeting and it’s not long before the film sinks in to the childish pit of humour it sits so comfortably. Most of the film is centred on the ridiculous conversation of the survivors and, therefore, skimps on the bloody and gory action sequences that zombie fans desire. Rather than giving us the mates versus zombie delights that are promised in the title, we’re forced to watch a man demand another man to take out his penis – because the first sign of the contagion is on the penis, don’t you know? “How does this work for women?” you ask; we have no idea and it is never mentioned.

There is just so very little here to enjoy, because this film is a one-trick pony of the worst kind. It doesn’t know what else to do other than use crude humour to insight a few laughs and, sadly, horror parodies have now evolved to deem films of this level of immaturity as unnecessary, un-funny and, ultimately, un-watchable. With a massive tweak of the script there would be something almost entertaining here, because the cast deserve far better than what they’re given. However, despite they’re damnedest efforts they cannot revive this lifeless zomedy.

This is one tiring effort from director Declan Shrubb and is about as memorable as a kick in the teeth; you’ll remember it for the rest of your life, but for all the wrong reasons. You’ll probably only find enjoyment in this film if you’re under the influence, because it lacks in almost every sense of the word; no plot, no scares and absolutely no genuine comedy.