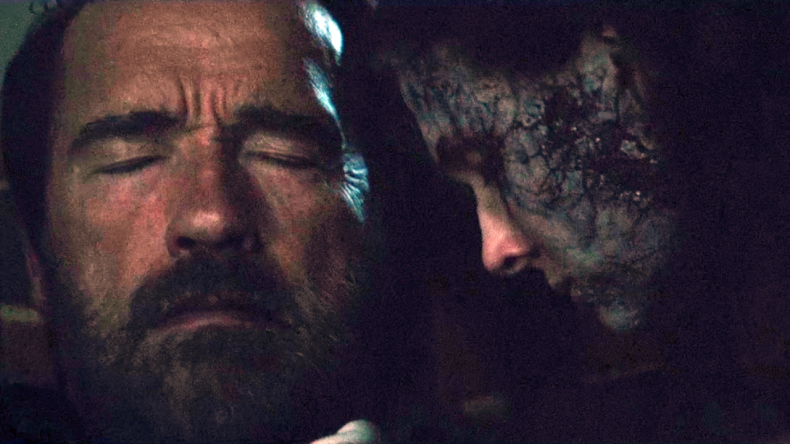 Schwartzenegger is fantastic. He has stripped everything that he is known for in favour of delivering a wholly believable performance that demonstrates that he can fully deliver a dramatic performance.
As a whole the slow-burn approach of the film may not appeal to larger mainstream audiences who may struggle to fully connect with the film due to the lack of any prolonged action or horror sequences.
Total Score
MAGGIE is a hard-hitting emotional drama with incredibly strong moments of horror. One not to be missed.

Synopsis: A teenage girl in the Midwest becomes infected by an outbreak of a disease that slowly turns the infected into cannibalistic zombies. During her transformation, her loving father stays by her side.

Zombies have come a long way since their origins in Haitian folklore. Since then the legendary filmmaker George A. Romero’s epic dead trilogy amended the legend to reflect an apocalyptic nightmare. In recent years the zombie sub-genre has crossed over into the mainstream thanks to the popularity of The Walking Dead television series which still contained all the blood and gore that you would expect from a horror series but the series also focused heavily on developing its characters.

In this time we have seen several attempts to replicate the success that Romero has experienced in the past and we have been treated to some truly fantastic zombie centric films such as Zack Snyder’s remake of Dawn of the Dead which was a gore hounds dream come true. We’ve also had some laughs with Edgar Wright’s Shaun of the Dead but then there have been some truly unique takes on the subgenre like Jeremy Gardner’s fantastic character driven drama The Battery that dealt with the zombie apocalypse as a catalyst rather than as the focal point of the story.

So what can audiences expect from the latest zombie flick to reach our shores? First of all there is the fact that MAGGIE stars none other than the Terminator himself Arnold Schwarzenegger. With him on board audiences would be forgiven if they thought that this would be an action packed adventure watching the big man take on hordes of the undead but those looking forward to something, I have some interesting news for you… this film is nothing like that.  So if you’re slightly concerned or in two minds about checking the film out then please believe me when I say that this is a film worthy of your time and I will tell you why.

Doing for Zombies what Jim Mickle did for Vampires in Stake Land, Director Henry Hobson has crafted a film that operates on multiple levels with such finesse that it quickly draws you into its apocalyptic world. Presented as a moving drama with very intense moments of horror, Maggie unfolds at a snails pace providing audiences with a fascinating character study about the relationship between a father and his dying daughter. This may disappoint those expecting more from the film but as a back-to-basics horror Maggie is very impressive as a whole.

Surprisingly, this is not Arnold Schwartzenegger’s film as you may have been led to believe. Instead it is Abigail Breslin who shines. Her performance as the titular character is simply outstanding proving that she is truly versatile actress worthy of recognition. She handles both sides of the coin and delivers every part of her performance flawlessly. This said, I was thoroughly appreciative of the work Schwartzenegger has done here. He has stripped everything that he is known for in favour of delivering a wholly believable performance that demonstrates that at the end of the day he can act and very well it would seem.

Also starring in the film is Joely Richardson who plays Maggie’s stepmother Caroline. Despite her characters best efforts to support her stepdaughter and her husband she slowly begins to fear Maggie’s eventual change. Although a much smaller role as the two leads, Richardson does an excellent job at supporting the rest of the cast and brings an interesting dynamic offering a different reaction as the events in the film unfold. As for the rest of the cast there is not one single performance that drags down the overall quality which was great to see.

As for the rest of the film there are several scenes of horror which were surprisingly strong. Some are flashbacks that revealing how Abigail Breslin’s character is infected with the virus but as the infection takes control the audiences are treated to more than a few gut wrenching moments achieved by some incredible make-up and what appear to be masterfully crafted practical effects. Speaking of the horror, there are two scenes in particular that have stuck with me, one at a gas station and one in a living room. Not only were these moments incredibly unnerving but they were perfected by the performances in this film.

As a whole the slow-burn approach of the film will no doubt appeal to art-house audiences and those who have the patience to let the film unfold. However, the same approach may not appeal to larger mainstream audiences who may struggle to fully connect with the film due to the lack of any prolonged action or horror sequences. This said, the dramatic elements of the film work incredibly well and carry with them some very hard-hitting moments that will most certainly pull at the heart strings of the audience as it did with my own.

MAGGIE is out in cinemas across the UK on Friday 24th July. 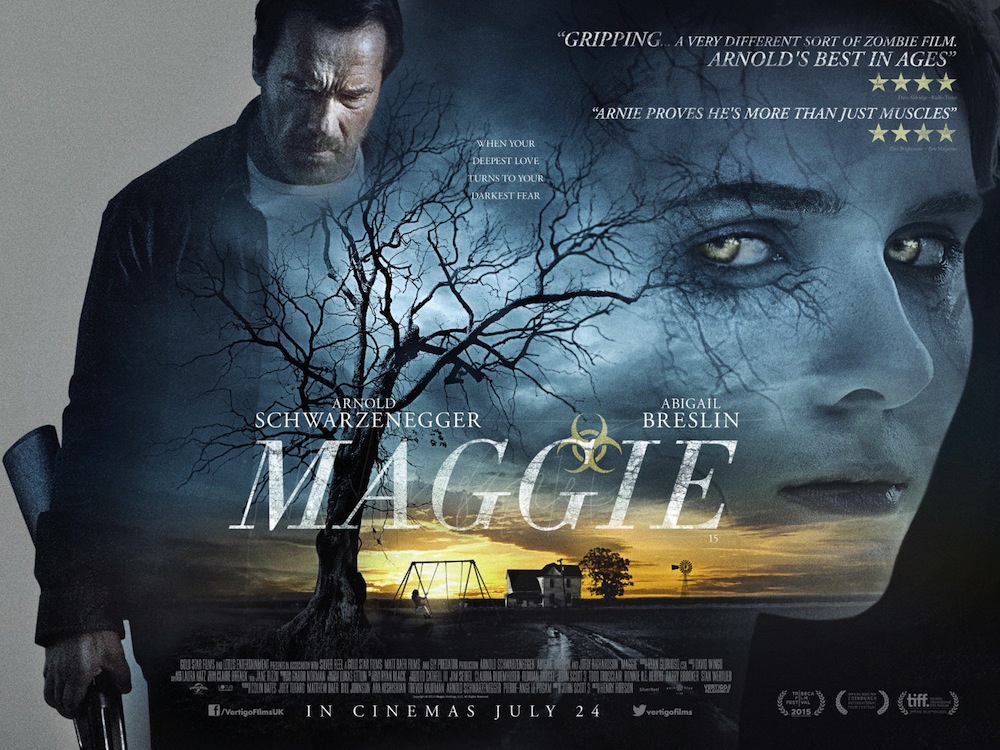 [HORROR AND SCI-FI EDITOR] Jon Dickinson graduated from Sheffield Hallam University in 2006 with a Bachelor of the Arts degree in Communication Studies with an emphasis on PR and Multimedia. Since graduating he has contributed to several publications and regularly attends some of the biggest film festivals in the UK including Film4 Frightfest.
You may also like
CinemaReviews