The father of the post-apocolyptic revenge movie returns with the same visual flair that made the first three so memorable. Jaw-dropping set pieces. Those guys with the poles? NOT CGI.
The constant onslaught can cause the fidgets waiting for respite. As likeable and excellent as Tom Hardy's portrayal of Max is, it doesn't quite exit the shadow of Mel Gibson as much as wanted.
Total Score
Unapologetically loud, brash and fast. This is an action film that is proud to be one and goes all out to deliver just that. Fury Road goes back to what made the original films great, delivering jaw-dropping visuals and exciting set pieces. One of the best, if not the best, action films in recent years.

36 years ago (yes, it’s been that long), a wide-eyed medical student introduced us via a boyish new face fresh out of drama school, a vision of dystopia that spawned an entire genre of films, a hundred cheap knock-offs and some pretty profitable sequels.  After walking away from his seminal Mad Max franchise in 1985 to concentrate on other projects, including one about a walking, talking side of bacon, George Miller has returned to the property that put not only him, but also Mel on the map.  Mad Max: Fury Road.

In this day, reboots, sequels and reimaginings are everywhere, from inspired rawness (Casino Royale), to the downright disastrous (Planet of the Apes).  Yet Fury Road claims to be neither sequel or reboot.  More of a ‘continuing adventures of’ addition to the franchise.  Neither directly ignoring or acknowledging the previous movies, this Max, played by a sullen and suitably dour Tom Hardy, is not the Max we have seen before.  The previous incarnation, played by Mel Gibson, was more Angry Max, filled with rage and despair at the loss of his wife, child and the society around him, but still with a glimmer of hope within him of the world still existing beyond the devastation and wasteland around him.   This Max is beaten and left for dead.  Hollow and forlorn.  This character is most definitely mad, with flashes of previous failures as an saviour. 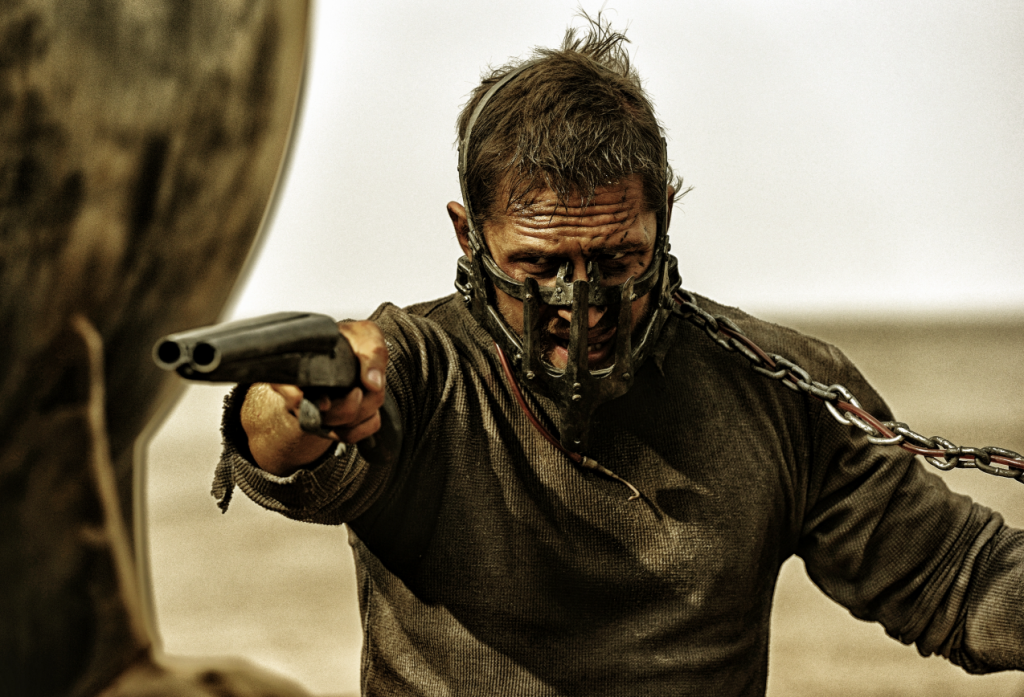 It’s this Max that opens the movie.  Gazing out across the wasteland numbly, simply surviving day by day rather than living.  It’s the sudden assault and abduction by the sadistic and cult-like Warboys that ignites any spark of life left in the man.  Tattooed, branded and forced to become a living ‘blood bank’ for Nicholas Hoult’s ‘Nux’, strapped to the hood of Nux’s car and hooked up to him providing a constant stream on uncontaminated blood.  It seems that everything has finally caught up with the looney lawman.

Enter Hugh Keays-Byrne as Immortan Joe.  A tumoured, medalled despot with the citadel (and it’s water supply) firmly under his grip.  This really is a standout performance in this movie.  Byrne spends the entire movie behind a horse-toothed battle mask, but easily overcomes this, chewing the scenery (and steering wheel) for all it’s worth, creating a character far larger than life, or indeed reality.  He’s channelled the Toecutter on speed.

His warrior elite, the Imperator Furiosa, played by Charlize Theron (sporting a Ripley-esque shaven head) is the instigator for the plot of the movie.  Taking a tanker bound for the nearby Gas Town for some of the good stuff the Mad Max lore has labelled ‘guzzoline’, suddenly veering off-course and heading into the Wasteland with as it turns out, Immortan Joe’s harem.  Breeding stock to provide him with a healthy, non-mutated heir.  As you can guess, Joe doesn’t like this and so begins the chase to retrieve them, spearheaded by Nux in his personal pursuit car and queueing up the most visually arresting film in recent memory.

The plot, like the dialogue, is sparse, but this is unashamedly an action film, made to thrill, excite and entertain.  And it does it in spades.  The visuals are breathtaking, each set piece storyboarded meticulously by Miller, creating some of the most memorable images for a long time.  Take this image of Miller’s version of a car stereo… 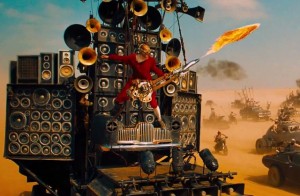 It’s this coupled with the booming tirade of engines, bullets and bombs that assaults the senses in such a relentless fashion, that when there is finally a silence, that silence itself becomes deafening.

The environment itself, originally the Australian Outback, but moved to Namibia due to an unfortunate case of vegetation, paints quite a picture for Miller as well.  One such scene has Furisoa and her kidnapped harem awaiting Max from some sort of mayhem during a duststorm.  The storm itself reducing their visibility and creating a sense of enclosure and claustrophobia that act as a counterpoint to the predominant scenes of the wide, sprawling desert.  This coupled with imposing canyons that hide anyone and anything waiting in ambush, creates a world that is never safe for a traveller.

I was hoping for something more raw, in my mind wanting less Thunderdome and more Road Warrior.  I got the opposite, but in a way I wasn’t expecting.  More Thunderdome gave amazing visual characters such as Immortan Joe that I haven’t seen this side of an Absinthe binge, and less Road Warrior due to Miller’s need to build on and succeed Thunderdome.  This time giving us the wide sweeping visuals of the Wasteland.  I loved the broken images of society in the first two films.  Broken roads, ghost towns, remnants of the old world and isolated stretches of highway.  These weren’t present in the third film, instead giving us the cobbled-together Barter Town and the Oasis where Captain Walker’s children waited patiently for his return.

Maybe that’s the point.  Once they’re gone, we can’t go back.

Maybe the future really does belong to the mad.

In my opinion, the summer certainly does so get yourselves out to check out MAD MAX: FURY ROAD in cinemas now!

Chris Bernard graduated with a degree in Biomedical Science and has yet to do anything constructive with it. An unashamed Star Wars and comic geek, Chris has decided to use his powers for good and regularly contributes via writing and artwork.
You may also like
CinemaReviews