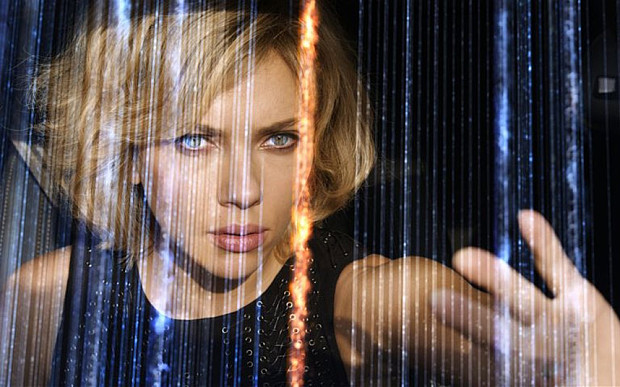 Admirably it takes its silly premise as far as possible. Well directed and moves along quickly. At times it plays like an unintentional comedy.
It start off stupid and gets even more stupid. Attempts at philosophy are misguided, but points for trying. When your character has every superpower ever, there's little tension.
Total Score
Lucy is dumb, dumb , dumb fun.

With it being based on a fully debunked myth about the human brain, it could be expected that Lucy would be pretty silly. What is both surprising and endearing about the film however is just how far it’s willing to take this central premise – far into the realms of insanity.

Scarlett Johansson stars as the titular Lucy, a student in Taiwan who is unwittingly exposed to a new type of drug. Humans, as Professor Morgan Freeman (sorry, ‘Professor Norman’) explains, only use 10% of their brain capacity. What would happen if we were to use 100%, asks a student from the most un-academic lecture you have ever seen. Professor Norman has no idea. The drug Lucy ingests allows exactly this, and as her brain’s capacity increases bit by bit, as indicated by intertitles telling us the current percentage, it allows her to process information faster, drive perfectly down Paris streets, shoot more accurately than anyone and er, control people and objects with her mind. Who knew we’ve had telekinesis locked away in our brains this entire time?

The gangsters Lucy got the drug from want it back. She wants it all for herself, in order to accelerate the transformation process and see what happens at 100%. Thus ensues a battle in which they pursue her across Europe. Of course, when she can make people go to sleep with a wave of her hand they have no chance. And so there is rarely any tension. There’s plenty of action, and it’s all entertainingly directed without being too flashy, but there are also quieter moments, like when she tells her mother on the phone that she can remember the taste of her milk in her mouth. Luckily her mother doesn’t hear the creepy sentiment thanks to a bad connection; otherwise she’d have probably been concerned her daughter might be on drugs, which incidentally, she is.

Use 0% of your brain while watching it (meaning ignore its ham-handed attempts at pondering the nature of our existence) and Lucy is quite a fun ride; its desire to commit fully to its stupidity means it zips along nicely and the ninety-minute runtime helps in this regard. The performances are fine, with Johansson making an interesting change from human to robotic as the drug affects her, Morgan Freeman being Morgan Freeman and a bunch of tough European cops and frighteningly brutal Asian gangsters. The film eventually degenerates into silliness that has to be seen to be believed and I implore you to do that, just so I can be sure I didn’t hallucinate it.

Always fascinated by films throughout his childhood, Stuart is now certain he wants to write about them. He has a particular fondness for the 70s American cinema he was introduced to throughout his time at the University of Winchester, at which he studied English. He blogs at https://afairjudgementdeserved.wordpress.com/
You may also like
Cinema