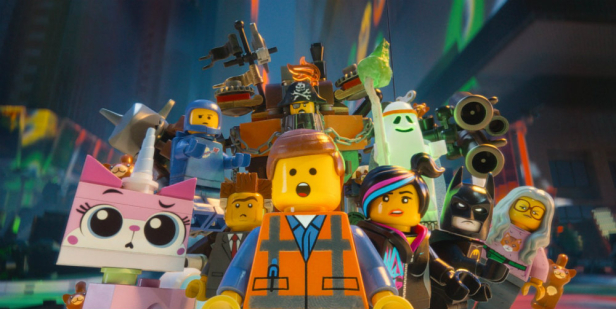 The movie very much begins deconstructing adventure tropes that lesser films frequently pander to, especially children's films.
It perhaps moves a little *too* fast at times, and if adults are struggling to keep up then you can be sure the kids will.
Total Score
A story kids can take something from and adults can enjoy without it ever becoming too kid-friendly. It's a movie made by people who know and love movies, and that becomes very clear. Even if you don't have kids, you'll be wise to check it out.

After decades of providing parents with endless blocks of plastic to tread on around the house, and lately many successful video games from various well known franchises, LEGO inevitably makes its way onto the big screen in The LEGO Movie, which could easily have simply been a giant, gaudy, incomprehensible cash in simply designed to take more money from the parents of impressionable children. Yet as is the current trend for animated movies to often punch about their cinematic weight, and at times exceed their live action counterparts, Phil Lord and Christopher Miller‘s version of the building toy range actually turns out to be not just a blast of childish fun but also well put together in terms of telling a story kids can take something from and adults can enjoy without it ever becoming too kid-friendly. It doesn’t top Pixar in striking an emotional chord, but it’s got a great deal going in its favour.

Right from the off, The LEGO Movie is about individuality, as through basic construction worker Emmet we are introduced to a block-filled world of pure synchronous unity enforced by President Business, a corporate tyrant brainwashing the LEGO populous through bad TV shows, bland rules and a cheesy pop ballad (that may get stuck in your head: warning). Will Ferrell‘s tycoon is an amalgamation of real world ideas that strike a chord in our ever corporate world and straight away the movie shows a level of depth between the fast paced journey Emmett soon goes on, that follows a standard adventure movie formula – evil super villain out to destroy the world, a plucky young hero who must find his destiny and worth, a cool and funky heroine to spar with him and a wizened old sage to guide him to find a magical artefact that can stop a terrible super weapon. So far, so routine, and the directors stuff to the gills serious voice talent for the adults to enjoy such as Elizabeth Banks, Liam Neeson and Morgan Freeman, many sending up their established live action personas well.

It’s as this point The LEGO Movie gets interesting because you realise not only is it all about taking winks and nods to a million well known movie franchises (Lord of the Rings and Star Wars to name just two), not to mention the beauty of LEGO licensing meaning we actually get Batman and Superman fighting evil alongside Gandalf, Han & Chewie & even Milhouse from The Simpsons, but the movie very much begins deconstructing these adventure tropes that lesser films frequently pander to, especially children’s films. It carries through the usual narrative peaks and troughs with tongue in cheek and a knowing nod to the grown ups that, y’know, it has an idea you’ve seen this all before but your kids may not. The little ones in my screening were laughing at Emmet’s pratfalling while the adults were chuckling at the one liners (including a wonderful subversion of a Terminator moment). It’s a movie made by people who know and love movies, and that becomes very clear, as does a visible understanding of the LEGO universe which they neatly tie into their themes – as a result, it’s a cleverer movie than it may appear on first glance.

Not everything is awesome, of course. It perhaps moves a little *too* fast at times, and if adults are struggling to keep up then you can be sure the kids will, and in the last third it really does hammer home the ‘message’ and threatens to become very, very saccharine via an unexpected final act twist that is… unorthodox, shall we say; it just about works, and it’s a brave move, but it almost swamps the film in a sentimentality it had largely spent the movie avoiding. On the whole, though, The LEGO Movie is a damn fine piece of work – quite stunningly rendered, a positive cornucopia of colour and imagination, well written and frequently funny, with damn good voice talent and the ‘squee’ factor as many of the greatest movie heroes show up. Even if you don’t have kids, you’ll be wise to check it out.