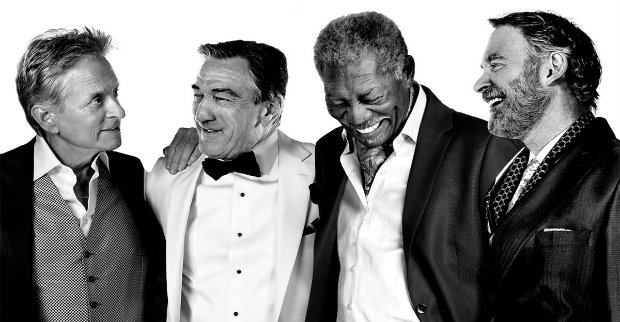 The troubles brought about by old age provide a rich cache of humour. Steenburgen is commanding with a hint of mischief.
For every thoughtful scene or gentle laugh, there is at least one unpleasant counterpart.
Total Score
Last Vegas is a comfortable diversion, it's just a shame voyeuristic sexist urges cannot be kept in check.

Bromance, one of the more hideous additions to the English language, often ends up applied to the antics of a bunch of insincere and infantile men who should know better. Yet here it is an apt description for a film that tries so hard to serve as a paean to comradeship and male bonding. Moments of humour and sweet friendship emerge only to be overwhelmed by unpleasant leering.

You can’t argue with the glittering array of distinguished actors involved. Their energy and warmth builds a rapport that allows them to coast on established personas. Michael Douglas is Billy, the wealthy, charming and slightly sleazy playboy, best friend of Robert De Niro’s dour Paddy. Relegated to comic relief, Morgan Freeman’s Archie dispenses witty advice behind a genial façade and Kevin Kline is the slightly oddball Sam. It’s hardly a long way from their comfort zones.

With Billy spontaneously proposing to girlfriend Lisa (Bre Blair), only in her early thirties, in an appallingly unromantic manner, the old school friends come together for a bachelor party in Las Vegas aided by nightclub singer Diana (Mary Steenburgen) who stumbles across them on the way.

When friendship takes centre stage, it’s all rather engaging. A soft melancholy air floats over the best moments. These friends who used to call themselves the Flatbush four have been reduced in so many ways from the vital and healthy kids they used to be. Where once they sang hymns to their own invincibility, now the first response when someone calls is to ask what ailment has afflicted them. The plot machinations may be unoriginal, particularly Billy and Paddy’s ongoing row, the course of which can be spotted a mile away, but the fear of diminishment and death, and their reliance on each other, is remarkably potent when Dan Fogelman’s screenplay heads in that direction.

The troubles brought about by old age also provide a rich cache of humour. Too much goes unexploited but Kline and Freeman manage to conjure up a laugh in most of their scenes, from Archie’s partying to Sam’s quest to make the most out of the condom his wife has given him, uttering the famous adage what happens in Vegas stays in Vegas. Acing her limited opportunities, Steenburgen is commanding with a hint of mischief. She dominates the four friends, easily sparring back in response to their weak come-ons and insults, and soon has them all, Billy and Paddy especially, wrapped around her little finger.

Disappointingly, for every thoughtful scene or gentle laugh, there is at least one unpleasant counterpart. The camera ogles attractive young women prancing around in skimpy clothing far too often. A nadir is hit when the Flatbush four bribe their way into judging a bikini competition, nothing more than a cheap excuse to parade women dancing provocatively in front of our heroes, but it is only one of many such missteps. Sam’s quest to use his wife’s gift, funny material in Kline’s capable hands, is vaguely off-putting at its core. He stalks around bars and parties, an ageing predator after a final kill. One particularly egregious line sees Romany Malco’s hotel host express dismay that he will no longer get to look after 50 Cent and pick up his spare groupies.

Even when it tries to be romantic, Jon Turteltaub’s film frequently fails. The men talk often of their love of women, yet behave as if they are some kind of trading game to be passed around based on which man needs or deserves them more. A brief line from Paddy to suggest this is not the case hardly neuters everything else we’ve just seen. Steenburgen is the only woman allowed to be a person, and she still exists mostly to provide wise words on male relationships while being fought over.

At its best, Last Vegas is a comfortable diversion that sees a high quality cast deliver laughs with a hint of poignancy. Unfortunately, voyeuristic sexist urges cannot be kept in check. More friendship and less slack jawed leering would have been advisable.

I'm a film writer based in London who only wakes up sitting in a darkened room watching light flicker across the screen. There are always far more films to see than time to see them, but I accept the challenge. When not writing here, I waste time on my own blog www.thefinalreel.co.uk.
You may also like
Cinema