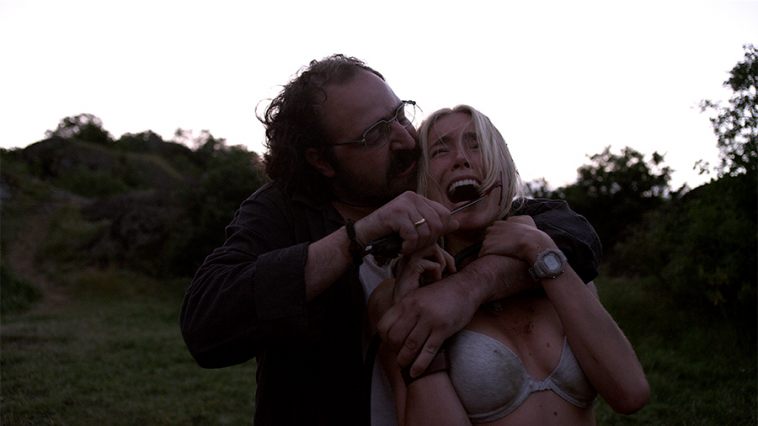 It has a unique concept that is executed wonderfully. Propelled forward by a strong cast and great script, this is one of the best and most surprising horror films to grace the screen.
Slightly long in parts and let down by some predictable moments.
Total Score
Well-acted and hugely entertaining, Landmine Goes Click is a wicked tale of helplessness.

Landmine Goes Click follows a tourist who steps on a landmine, and is then forced to stand and watch as the girl he loves is terrorised by someone who supposedly just wants to help.

Landmine Goes Click has such a peculiar concept that is impossible to not, at least, be slightly curious about. A man steps on a mine and then just stands there for the whole film? How on earth can this fill 100 minutes? Those questions immediately popped in to my mind before I sat down and, unbeknownst to me, put on one of the most surprisingly gripping and entertaining horror films I’ve seen in a long time.

The plot of the film alone is downright horrifying; imagine being unable to help as the person you love is abused right in front of you. Landmine Goes Click captures this feeling of helplessness and transfers it on-screen remarkably. Through the use of sweeping aerial shots of the Georgian landscape coupled with extreme close-ups and a poignant soundtrack, there is an undeniable amount of emotion present as we watch Chris (Sterling Knight) bear witness to Alicia’s (Spencer Locke) torment. Not only does the film persuade us that he absolutely cannot do anything – he’s on a damn land mine! – but, it entices our own feelings of frustration and devastation. Without these feeling of association, attachment and most importantly, credibility, Landmine Goes Click would have entirely failed. Fortunately, the film is far from a failure and manages to execute an unusual and unique concept in a believable, affecting and chilling manner.

Aside from the fact that Landmine Goes Click makes you feel a bit sad, it makes you scared, too. What if I’m walking home and I step on a landmine? Kidding! It makes you damn frightened of the maniac terrifying Alicia, though. Played alarmingly well by Kote Tolordava – who sadly passed away in April of last year – Ilya is one hellish character. He’s certainly not someone you’d want around when you’re stuck on a landmine with, as is the case with 98% of all horror films, no phone signal. He’s a manipulative son-of-a-bitch who abuses his power to encourage Alicia to do unspeakable acts – for example, to crawl around on the floor like a dog – in return for his ‘help’. These scenes are infuriating and you’ll be begging for Ilya to get his comeuppance by the time the film reaches its expectedly explosive ending. He’s one dastardly villain, but there’s something subtly hilarious about him. If Chris wasn’t a slave to a landmine, you know that he could probably show him who’s boss. Ilya’s behaviour ranges from comedic – like, throwing a rock at Chris – to full-blown threatening in a matter of seconds. These abrupt shifts in his personality are jarring and shocking, helping to drum up the suspense, but also cement him as a noteworthy and original horror villain.

Just like Chris himself, Landmine Goes Click is limited to a very small space. In order to ensure that its audience does not tire from the lack of scene changes and differences in setting that we’d get with most films, we are greeted with long, sweeping shots that flow seamlessly around the characters and keep our eyes always entertained. The lack of cutting also emphasises the amount of time the couple are trapped, helping to ramp up the tension as their situation continues to spiral in to a living nightmare. The camera literally goes round and round as the pair metaphorically go in circles as they try to salvage an ounce of hope as time ticks slowly by. Watching Chris and Alicia regain their sanity in this ultimate crisis is nerve-shredding and, unashamedly, exciting for the audience. Rather them than us, right? As lovers of horror, we relish in other people’s in peril and Landmine Goes Click gives us a tale of terror that is unpredictable, thrilling and awfully impressive.

This is an exploit of good script-writing, because it almost entirely relies on back-and-forth dialogue between only 3 characters. Of course Tolordava is at the centre of the enjoyment, as we are constantly on edge wondering what his character is going to do next, but Knight’s retrained, yet furious, Chris and Locke’s tough cookie Alicia both do their parts in ensuring our gazes are locked on their predicament. Thanks to the convincing cast, and the film’s damn closely perfect pacing, our attention never wavers. Very few films can remain consistently entertaining when very little happens and Landmine Goes Click earns its place as one of the best claustrophobic films; even if the space is, technically, very large. It’s a great little slow-burner and plays out like the ticking time bomb Chris is standing on. You’ll have to give it a watch to see if his patience pays off, but ours certainly does.

In short, Landmine Goes Click is a wonderful surprise and manages to execute an idea that, on paper, should not work half as well as it does. It’s a pleasure to watch the events slowly, but surely, unfold and it’s definitely worth sticking around with until the end.