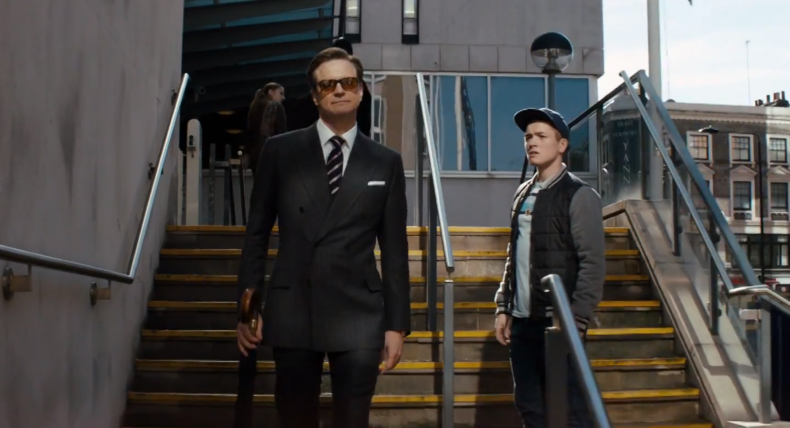 Affectionate subversion of the early Bond spy era, with plenty of action, a brilliant villain and comedy that mostly hits.
CGI that already looks dated and the hyperstyle becomes grating.
Total Score
Stellar star-making performances, a whirring hyperstyle, something that is poignant and righteous to say, create a dizzying, visceral comedic actioner that does end on a bum note.

Matthew Vaughn loves embracing a genre wholeheartedly whilst subverting it with affectionate self-reflexive pokes. This time it’s the spy movie era before Bond got badass. Vaughn plays with the genre with knowing nods to the audience without being a parody or a spoof. Kingsman: The Secret Service is still a great spy movie, a welcome addition to the earlier Bond canon, that is action packed, stylish with plenty to say about the modern era. Although not everything is as bright as the colours of the film.

Secret agent Harry Hart (Colin Firth) works for a secret, private spy company called Kingsman. Dressed to the nines in suits, they stylishly clear a room without spilling a single drop of whiskey. It would be rude to. After the unfortunate death of his father, Gary ‘Eggsy’ Unwin (played by North Walian Taron Egerton) seems to go through life by the intervening hand of London poverty. With a clear cockney accent and a penchant for mischief, Eggsy is a man of a broken system that society has given up hope on which, in effect, makes him give up on himself. Harry Hart offers assistance in reforming this troubled youth’s life by adding him to the Kingsman programme to unlock his full potential.

There is much fun to have with Kingsman: The Secret Service. Most of which is performance related. Colin Firth shows us how he would have played Bond before the Craig realism reboot, a fun image that we may have missed out on otherwise. Outside that we have Samuel L. Jackson‘s hilarious theatrical billionaire villain, Valentine, suffering from an aversion to violence and a prominent lisp. Mark Strong proves again that he can assimilate to any nationality with his easy adaption to the Scottish accent. His tech character could have been another exposition droid that we see, but the way Strong performs the comedy makes him more than a desk jockey.

The standouts aren’t the familiars though, they are 100% the newcomers. Sophie Cookson‘s Roxy does not get the most to do or really say, more a serious character within a silly world, but it utilises her talents. Sofia Boutella may be famous for StreetDance 2 but all that will change after a physical, threatening performance as Gazelle, Valentine’s right-hand woman with deadly blades. The real star of the hour is of course its lead, Taron Egerton. It is a surprise to find out that the actor was born in North Wales, but even more a surprise that he managed to make the accent and the lingo endearing, charming and sympathetic at the same time. This is a star-making role for a man who should (and will) be having many a phonecall after this.

Matthew Vaughn’s flair brought to the action sequences makes them great yet grating to watch. The hyperstylised sequences can be off-putting in areas. Fights are stretched out by abusing slo-mo while the camera (too plainly CGI in many moments) throws itself around the room to match the kinetics of the dynamic fight. This does work at times – a sequence in the church is brilliantly inventive – but fatigue kicks in for the third act of the film. One sequence that should be the most fun and is the most anticipated is the run of a mill fight sequence seemingly choreographed by Capoeira  fighters to match the hyperstyle. That final sequence is better from the surrounding environment than in the actual battle. It is, at best, a one-minute fight stretched out by flips and slow-motion.

Despite problems with the an over-reliance on CGI, creating garish visuals like the unfortunate, ugly titles, it does not hinder every aspect of the aesthetics. It does feel like the budget either needed to be bigger or there needed to be a mixture of practical effects to then improve the detail on the CGI. Vaughn, after X-Men: First Class, should know the importance of visual effects in a large-scale actioner, pointed out as the main weakness of a rushed blockbuster. Kingsman: The Secret Service is still maniacally fun; it is Austin Powers with grand action sequences. The theatricality of the spy-genre is both welcoming and enjoyably silly, making Kingsman: The Secret Service guaranteed as a mainstay of the year’s most fun and pleasing films. Stellar star-making performances, a whirring hyperstyle, something that is poignant and righteous to say, create a dizzying, visceral comedic actioner that does end on a bum note.