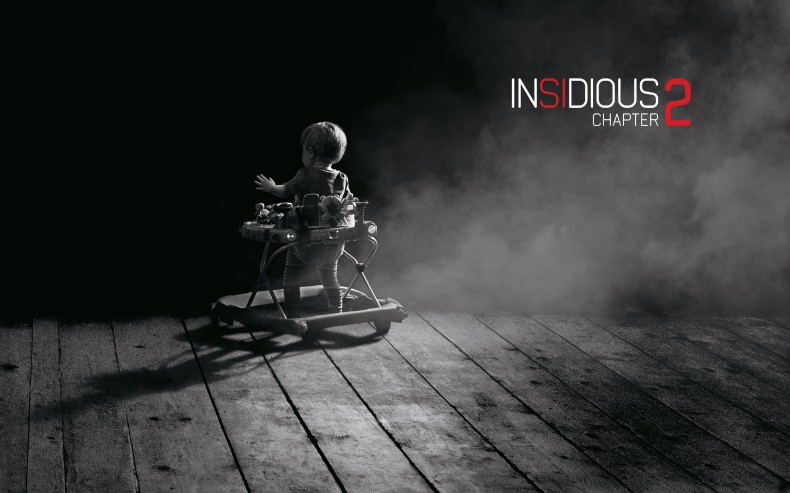 Screenwriter Leigh Whannell is refining his craft with every movie, learning the balance between comedy, sentimentality and, of course, scares. Wan reinforces it with his brilliant camerawork and sound-mixing.
James Wan has now confirmed that he’s retiring from horror.
Total Score
Insidious: Chapter 2 is a scarier, nosier, full on horror film that recreates the same atmosphere from the first but elicits more scares than its predecessor and possibly the majority of other sequels.

James Wan has now confirmed that he’s retiring from horror because it’s mainly what he’s been doing for the past decade but with this and The Conjuring coming out this year means it’s a huge loss for the genre. Fingers crossed it’s only a hiatus rather than a full blown retirement. Regardless, after 2010’s sleeper hit of Insidious Wan and Whannell – writer and regular co-collaborator – are back together again for the sequel. Its predecessor was criticised for its messy third act but its third act is one of its strong points because of its originality. Originality in horror is lacking often, many complaining about the genre being quiescent but Insidious was still a hit leading to sequel rumours for the off. Insidious Chapter 2 won’t convert many who were sceptical about the way it went because it takes it further – that’s far from a bad thing.

We’re back with the Lamberts right after the happenings of the first. They’re in the childhood home of father Josh (Patrick Wilson) where more things are going to bump in the night than allSTARS can sing about. Renai (Rose Byrne) is again being tormented by spirits that seem to love torturing the mother of three. Real pleasure in this comes from the extension of the mythology of the first as well as its relentlessness from the off. Horrors usually begin by creating an atmosphere, an eerie air of unease of things to come, but its predecessor did all the work already meaning they can launch straight into merciless paranormal torture.

Leigh Whannell is refining his craft with every movie, learning the balance between comedy, sentimentality and, of course, scares. He’s doing this while creating some of the most refreshing horror that started the gory horror trend with Saw and now by taking the paranormal into a further realm. Dialogue used to be a problem of his earlier work which contained dialogue that was sappy. That is no longer a problem in this film, adorned with creepy dialogue, spine-tingling whispers, Whannell writes an atmosphere that comes off the page. Wan, then, reinforces it with his brilliant camerawork and sound-mixing which will have you wondering if the rest of the audience heard it too.

Another hero of the film is Patrick Wilson who puts in a performance very different from the original and even further from this year’s The Conjuring. Performances that are this unnerving help elevate the horror too but could easily fall into a hammy portrayal that’s laughable. Wilson never falls into that pitfall, creating an atmosphere with every sinister second he spends on screen by himself, regardless of everything else surrounding it. Rose Byrne plays the drained mother who doesn’t recognise the man staring back at her well. Then newcomer to the series Danielle Bisutti pops up to make you terrified of ever doing a double take again. Ty Simpkins returns from his Iron Man 3 success as Dalton but spends considerable more time awake and proving he has talent.

Unfortunately it screams post-production rush which could extend to production too. With James Wan releasing two films this year and planning to release Fast and Furious 7 by next year too, this suffers from a lot of continuity errors that are blatant ones due to poor editing. Insidious was an editing feat, takes and scenes shown for the perfect amount of time and the sound perfectly edited and mixed in to create the atmosphere that is the centre of the fear it invokes. In this, it sometimes detaches the audience from the movie because of errors that are too common too often and uncharacteristic of a meticulous director like James Wan. After a mishap is spotted, it’s back to being terrified because it successfully recreates the mood.

Horror sequels usually suffer from rehashing the first, by trying to recapture the lightning the bottle, this may borrow from it but it’s much more than its predecessor. Where the first started as a quiet horror that escalated into something grander, this has its quiet moments but it’s angrier, scarier and it has more scares than the first but less of the crafting in execution because of the visual errors. Looping it around the first means the story is incredibly well-written, going in a way unexpected that outsmarts the majority of the audience. Insidious Chapter 2 is a scarier, nosier, full on horror film that recreates the same atmosphere from the first but elicits more scares than its predecessor and possibly the majority of other sequels. James Wan retiring from the genre isn’t with a whimper but with a bang. Multiple bangs. Terrifying ones. Bringing something to hide behind. You’ll need it.