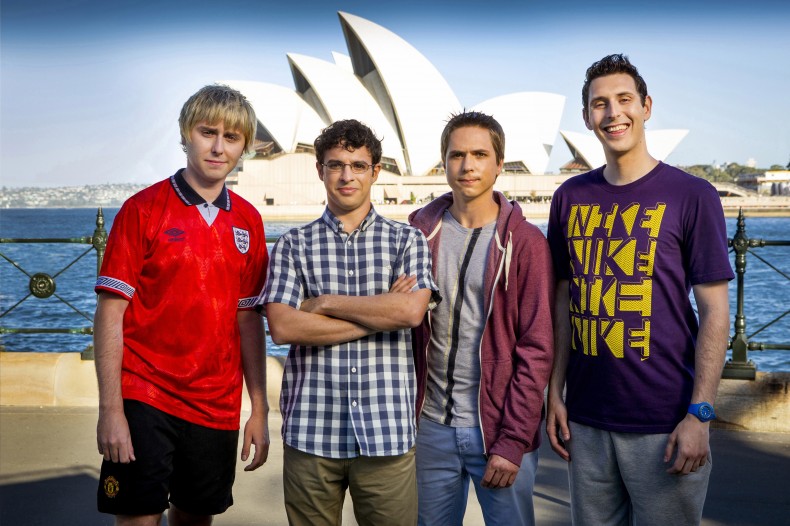 Consistently funny. The four main characters have great chemistry. Different enough from the series to warrant its existence.
Australia is underused as a location. Unnecessary abundance of toilet humour. Female characters generally exist to be sex objects or harpies.
Total Score
Crass, puerile and funny, The Inbetweeners 2 succeeds in its mission to make Inbetweeners fans laugh for ninety minutes. Just don't expect any subtlety.

The second spin-off film from Channel 4’s popular Inbetweeners series, The Inbetweeners 2 provides the familiar mixture of banter and embarrassment, this time with a double helping of gross-out humour. If you’re a fan of the series, it will probably give you everything you want from a feature length version of The Inbetweeners and even if you are previously unfamiliar, everything is presented to be accessible to newcomers. Just leave any delicate sensibilities at the door.

For those new to the concept, the Inbetweeners are a group of four eighteen year-olds neither cool enough to hang out with the popular kids nor nerdy enough to be part of that clique, either. Will (Simon Bird) is our guide, providing narration and commentary every now and then and the film focuses on the exploits of him and his three friends, Simon (Joe Thomas), Jay (James Buckley) and Neil (Blake Harrison).

In traditional spin-off from a TV series style, The Inbetweeners 2 attempts to be bigger than its small-screen parent; in service of this the action is moved to Australia. Similarly to their attempts in the show to fit in at school, Will and co. try to find their place among those travellers they believe to be cooler than them, resulting predictably in much awkwardness and embarrassment. It’s Peep Show style comedy, mining the most cringeworthy moments for all they’re worth when other programmes might have cut away to spare audience embarrassment. While the show itself has never shied away from the puerile, this film outing also brings with an extra-large dose of toilet humour. Put it this way, it’s not something to show your Nan.

If you can get past that and a lack of strong female characters, you’ll find a rather well done tale of the power of dysfunctional male friendship, as well as a very funny film. It’s just a shame it doesn’t use more of its Australian setting; its travel hostel and waterpark locations could have been anywhere in the world really. With that said, a sequence in the Australian Outback is both well done and cinematic. And that’s what I ask from a film like this: a) not to feel like simply a drawn out TV episode and b) to add something that couldn’t have been accomplished in the TV series. The Inbetweeners 2 avoids the former and succeeds at the latter; it keeps the jokes up throughout its running time and never sacrifices humour for plot. It’s a success and a fitting end for the boys’ coming of age saga.

Always fascinated by films throughout his childhood, Stuart is now certain he wants to write about them. He has a particular fondness for the 70s American cinema he was introduced to throughout his time at the University of Winchester, at which he studied English. He blogs at https://afairjudgementdeserved.wordpress.com/
You may also like
Cinema