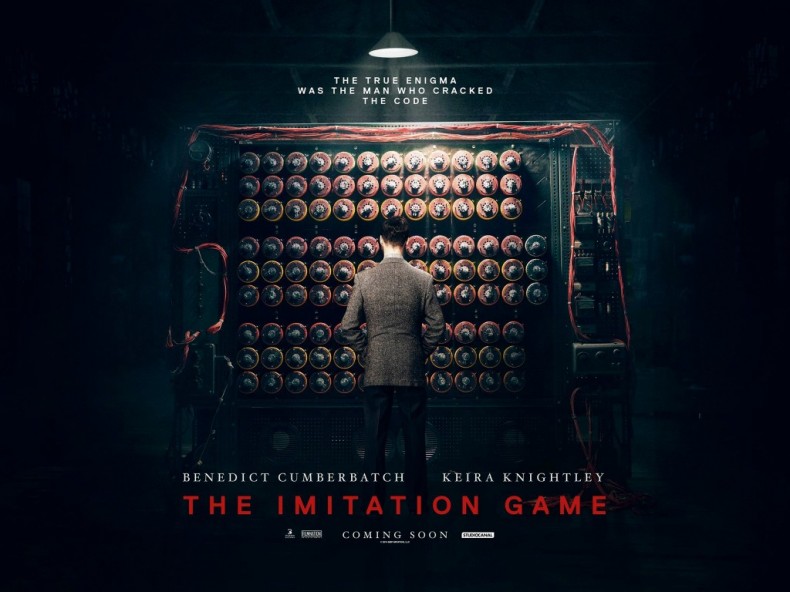 The film’s gripping moments are decidedly tense, the more poignant scenes rather heart-rendering.
A feather-light depiction of chemical castration, plus it feels too televisual at times.
Total Score
Though fluffy at times, it’s substantially elevated by its acting, making it one stuttering monarch short of The King’s Speech.

Man-of-the-moment Benedict Cumberbatch has free rein on his roles at present. From embodying Victor Frankenstein (and his monster) at the National to cropping up in The Hobbit 3, 12 Years a Slave and any number of Shakespeare adaps, and voicing Shere Khan in a pending Jungle Book prequel. News that Sherlock will continue into 2017 (ascertaining at least two new episodes) sends Cumberbitches worldwide into hysteric paroxysms – so kudos to him that he’s devoted his skillset to portraying Alan Turing, the great-granddaddy of modern computers and national hero. Whilst Turing’s story is by no means unheard, it certainly deserves a more prominent platform in public consciousness, influencing as he does practically every instant of contemporary daily life. The film, from Norwegian director Morten Tyldum, makes a valiant, if occasionally flawed, effort to bring this story to the screen.

The Imitation Game, more a general depiction of self-contained stories than an all-encompassing biopic, divides its focus between Turing’s early life and his wartime experience, fluctuating between his Tom Brown-style schooldays at a posh, prejudiced boarding school, and his triumphs as a code breaker in the ‘40s. As a child, he’s socially awkward, passionate about crossword puzzles, embroiled in the semi-welcome throes of a burgeoning homosexuality, passing notes to his could-be boyfriend and avoiding the perilous presence of generic schoolyard bullies. As an adult, the social ineptitude and crossword obsession remain, but Turing is a self-confessed genius, with an offbeat implacable confidence you can’t help but admire. Appointed by Churchill and a moustachioed Charles Dance, he cobbles together a team of exceptional intellects and sets about cracking the German Enigma code, assisting the Allies with winning the war, oh, and also, inventing the computer. Why the man wasn’t given filmic attention earlier remains to be seen.

As far as acting goes, you more or less know you’re in safe hands. Casting director Nina Gold has adeptly blended a cluster of beloved British thesps, all reared primarily onstage, from Matthew Beard (David Hare’s Skylight) to Rory Kinnear, fresh from an Olivier-winning turn as Othello’s Iago. Cumberbatch is the one under the most scrutiny, and fortunately lives up to expectations. The extent of research he’s put into researching Turing is remarkably palpable – despite the character’s unabashed self-belief, he never verges on arrogant or dislikeable. (Allegedly Turing’s relatives were overjoyed at the casting choice, and were surprised at the wealth of knowledge Cumberbatch possessed on Alan, far surpassing their own.) Keira Knightley, reunited with B.C. for the first time since their Atonement days, gives her best performance to date, and the two have great chemistry together. Everyone sounds as if they’ve tumbled out of Brief Encounter elocution lessons, pronouncing “really” as “really” and “Oh” “Oe,” the accents particularly well observed. The credible cast is just one of the many boxes the film ticks to mark it as a quintessential “Britflick” – set during wartime, a triumph against adversity, people in suits. It’s one stuttering monarch away from The King’s Speech, and is consequently guaranteed to please.

However, the film doesn’t quite meet the standards of the Tom Hooper modern classic that scooped Colin Firth his statuette. Various tired movie tropes surface throughout: the mistrustful Sergeant who “takes a chance” on Turing, then fires him halfway through for lack of a quick result, only to be proven wrong once his co-workers rally together in defensive support and triumph. Reports of factual inaccuracies are also starting to appear. For me, however, the film’s problem is simple: it’s too pretty. This story, in reality, is dark and detestable, yet Tyldum casts its graver elements aside in favour of saccharine schmaltz. Whilst Turing’s homosexuality, taboo at the time, is touched upon, it’s never effectively brought to the forefront. There’s no mention of his post-war boyfriend Neville, or his trysts in Manchester and Norway, his platonic friendships with homosexuals at King’s. For a film so evidently in support of the LGBT community, it’s peculiar it’s not made more of. What’s more, his subjection to the abhorrent practice of chemical castration is only noted in a brief scene with his former fiancée Joan, and his grisly suicide glossed over with a caption at the finale. To suit its upbeat narrative or audience appeal perhaps? In my opinion, the film’s succinct acknowledgement of these facts undermines the atrocity of what Turing and 50,000+ other homosexuals experienced and belies the sinister side of its story. A basic Wikipedia search reveals the true barbarity of what chemical castration really entails, and it doesn’t look much like this polished, pristine portrayal.

That said, The Imitation Game is substantially elevated by its acting, and although it feels too televisual at times, it’s hard to dislike a movie that ushers Turing’s plight into the limelight. The film’s gripping moments are decidedly tense, the more poignant scenes rather heart-rendering. If little else, it’s made me proud to be punching out this review on a Turing machine (aka my Macbook) because without the man, Western culture (and our lives) would consist of a very different landscape.

James Morton is a writer, playwright, filmmaker and Durham graduate, working in TV in London. To date, he has written 9 plays and produced over 20 short films. He is currently based in London, working on a series of shorts and a feature length project.
You may also like
Cinema