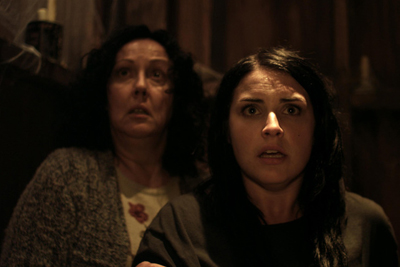 Johnstone's script is razor-sharp and his direction is just as sound as he combines his horror and comedy elements perfectly.
Due to the slow-pacing of the film I suspect that the effectiveness of the film will not stand to repeated viewings.
Total Score
Housebound works both ways as comedy and as a horror film. It's fun, It's scary and knows how to entertain.

Inspired by Ghostbusters and such haunted-house classics like The Changeling and The Legend of Hell House, HOUSEBOUND is the feature debut of Gerard Johnsone and received universally positive response after its premiere at SXSW. Starring Morgana O’Reilly, Rima Te Wiata, Glen-Paul Waru and Cameron Rhodes, Housebound is a horror comedy all the way from New Zealand unlike any other that you have seen before.

The film follows Kylie (O’Reilly) who is sentanced to nine months house arrest after a robbery gone wrong. Forced to move back in with her mother Miriam (Rima Te Wiata) who believes the house is haunted. Thinking little of her mother’s claims Kylie is horrified when strange things begin to happen around the house. Kylie takes it upon herself to get to the bottom of the mystery which turns out to be even stranger than she could ever imagine.

As his feature debut, Gerard Johnstone has done a wonderful job with Housebound. Not only is his script sharp and witty but his sense of direction is just as solid. In combining horror and the comedy elements perfectly, Johnstone has crafted a film which is dark, gritty and full of mystery. Not only does it stand strong on its own as a genre film but it stands shoulder-to-shoulder with the very films it was inspired by.

Morgana O’Reilly is sound as as Kylie. It takes alot to scare her character thanks in large part to her scepticism obut when the brown stuff hits the fan her fear is validated and feels that much more real. Meanwhile, Rima Te Wiata also gives a charming performance as the well-meaning mother who simply doesn’t shut up. Together they form a strong mother-daughter bond that appears real on screen and the interactions between their characters are incredibly funny which again is a true testament of Johnstone’s writing.

As a whole, HOUSEBOUND works both ways as comedy and as a horror film. It’s fun, It’s scary and knows how to entertain its audiences. You will laugh, you will jump but most importantly it is a film that you simply can’t miss out on.

[HORROR AND SCI-FI EDITOR] Jon Dickinson graduated from Sheffield Hallam University in 2006 with a Bachelor of the Arts degree in Communication Studies with an emphasis on PR and Multimedia. Since graduating he has contributed to several publications and regularly attends some of the biggest film festivals in the UK including Film4 Frightfest.
You may also like
Killer ChordsReviews