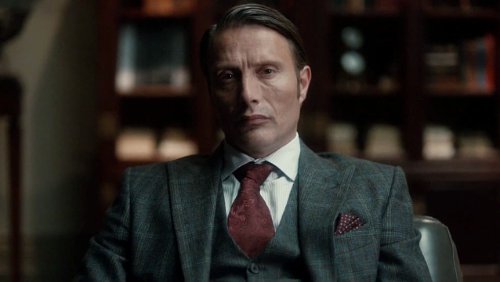 Hannibal improves upon its first season. It maintains its stylish, elegant feel with amped up productions and even more violence.
Season two has a big problem if you are going to watch it in a binge. Its opening is high octane which is thrilling, but it drains the suspense of later episodes that would grip your throat and dig its nails in with tension otherwise.
Total Score
Some of the episodes may lull but Hannibal Season 2 remains transfixing, through bizarre dynamics and interesting characterisations of killers and investigations.

After 559 minutes in a day, you can spot a lot of Hannibal‘s shortcomings, rather than waiting a week for each episode. After the rather captivating finale of the first season, especially the subversion with the final shot, it seemed that Hannibal had broken in on itself. No longer would it need to satiate the audience that is looking partly for something that resembles CSI, with rather sick and twisted murders every week, solved indefinitely with only a throughline between Will Graham – Hugh Dancy is either perfect or too much – and Hannibal Lecter – Mads Mikkelsen plays his character with a devilish relish that even tugs on your sympathies. No longer would they present someone with an iPad of information, solving the case, in the final few minutes to conclude the episode. It could be broader, bigger, be more daring and playful with the characters now that it didn’t have to do those daily episode conclusions. Bryan Fuller has done a good job running the show, but still there is something amiss, something problematic.

As this is the second season review, there will be spoilers for the first season as it continues on from there. Nothing much will be specified from season two – especially not the last few episodes. Will Graham is now in Baltimore’s State Hospital for the Criminally Insane after being framed by Hannibal Lecter for the murder of several women. No one believes that it was actually Hannibal being the murderer – an ex-surgeon now psychiatrist with a penchant for food and manners isn’t possible of murdering, of course. Will Graham, while going under extreme scrutiny and psychiatric evaluations, must convince everyone around him of his innocence and Hannibal’s guilt. Season two has a big problem if you are going to watch it in a binge. Its opening is high octane which is thrilling, but it drains the suspense of later episodes that would grip your throat and dig its nails in with tension otherwise. Though knowing that something else to comes leaves less tension and more curiosity in how they will play out. Perhaps that’s purposeful but it feels as though the programme is missing a trick.

The subtlety that was in the first season of Hannibal’s murders has disappeared slightly. Now that we know what he is all about, he even gets dressed up like Patrick Bateman in American Psycho – although it’s much more sinister when you take away Huey Lewis and the News. We may be more aware of his professional curiosity in Will, his sociopathic love for a cruel game of cat-and-mouse with the law and his extra love for slicing, dicing and serving up humans, it feels like it is slightly more obvious that now it is Hannibal. He is around clever professionals constantly who seem to skim over the fact that he has been able to affiliate himself with all of the victims and is a skilled surgeon – a necessity in stitching and organ removal. Jack Crawford (Laurence Fishburne) is a successful FBI agent, ranking his way up, yet he still can’t see what is right in front of him. Hannibal may distort the truth, especially the evidence presented to give his view to lead them off the trail, but an agent of that standing would not be that blinded. Especially given his relationship with Will Graham.

The first few episodes are brilliant. Playing on having Will Graham behind bars and Hannibal Lecter filling in his role for the FBI is a nice step, leading to some interesting moments as the tension rises as to whether or not Will Graham will be found guilty. The first season played with the professional curiosity Hannibal had in Will but with a different dynamic. In this season, Will is aware of who Hannibal is yet they continue delving into each other’s sociopathic minds, playing games throughout. Each character has the same flaw: infallibility. Will thinks he’s the most intelligent, therefore he’s a step ahead of Hannibal. Hannibal thinks he’s the most intelligent and that his psychiatry is paving the way for Will’s manipulation, meaning he’s a step ahead. Jack Crawford watches from the sidelines as the titans go at each other, thinking that as he can see both of these things objectively – which he doesn’t – that he is the step ahead. Alana Bloom (Caroline Dhavernas plays her particularly nicely, despite the character’s shortcomings) is possibly the most foolish of all the characters, believing that she knows and understands sociopaths better than anyone else but you will see for yourself that it is far from true. Her trust is misplaced every time.

Hannibal maintains its stylish, elegant feel with amped up productions and even more violence. What is bizarre about this cable network programme is that it can show wince inducing gore but it cannot show any nudity. Sometimes its stylistic flourishes are its own undoing. In one scene, the sun is supposedly rising over Will Graham’s house, but it is plainly obvious to tell that it is done via the colouring – a poor job at it too. It also still holds the mantle as TV programme filled with food porn – a severed leg will make you salivate; that is until you know it is a severed human leg. Hugh Dancy explores the more neurotic, arrogant side of his messed up character to have it all undone in a spectacular finale that throws every single thing at you – even a few surprises you could not and would not remotely guess.

Episodes may lull but the series remains transfixing, through bizarre dynamics and interesting characterisations of killers and investigations. Finally it embraces its intricacy as it builds to a conclusion that is bound to burst someone’s bubble of arrogance. You will also get to see why people are now asking for Michael Pitt to play The Joker, should they cast another reiteration in the future. His character is essentially The Joker without the make-up. Hannibal improves upon its first season, which of course means amping up every aspect, especially the stakes. It will hook you, pull you in for its finale, then throw you to the bottom of the barrel before it tears you apart. An improvement overall that needs to fix some episodic lulls, character motivations and regain tension by not starting somewhere later down the line.

[Associate Editor] I'm a film lover, film writer, film graduate who spent many sleepless nights chaining films until the sun came up, making me love all things film and pursuing a career in the industry. Follow @ashleyrhys on Twitter for more ramblings.
You may also like
DVDReviews