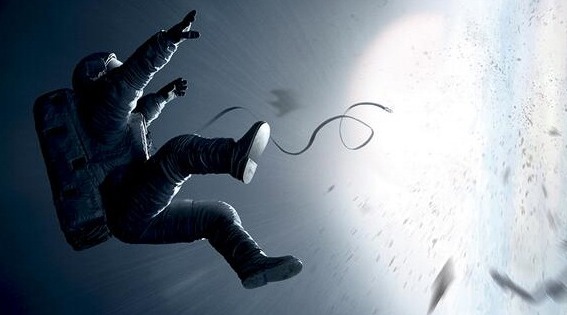 Gravity remains stunning from its jaw-dropping opening sequence. Cuarón’s direction is superb, the CGI is flawless, and Emmanuel Lubezki’s cinematography remains outstanding.
Gravity looses some of its mighty impact when seen on a smaller screen at home but only because it is near impossible to replicate the same feeling that you get from watching this movie on IMAX or any decent sized cinema screen.
Total Score
Even on the smaller screen, Gravity remains a super intense thriller at its core and is the reason why you should own a 3D television.

At 372 miles above the Earth there is nothing to carry sound. No air pressure. No oxygen. Life in Space is impossible. So when your space station is destroyed by a storm of space debris what can you do to survive?

Gravity is a science-fiction thriller directed by Alfonso Cuarón (Children of Men). The film stars George Clooney and Sandra Bullock as astronauts who are stranded mid-orbit when a storm of space debris destroys their space station leaving them floating alone in space. WIth the warning of more space debris heading their way the astronauts make a desperate attempt to reach the next space station in hope that they can return back to Earth.

When I first saw Gravity in the cinema I was simply blown away by it. Not only did it score highly in many people’s top ten film lists of last year but we thought that the CGI and the use of 3D was the best we had seen in quite some time. So as Gravity floats on over to DVD and Blu-Ray on Monday 3rd March we took time out of our working day to see just how well it transfers from the big screen. Here are our thoughts.

Despite its basic story, Gravity remains stunning from its jaw-dropping opening sequence. Cuarón’s direction is superb, the CGI is flawless, and Emmanuel Lubezki’s cinematography remains outstanding. Alfonso Cuarón along with his son Jonás Cuarón have crafted a film that not only stands shoulders above some of last years offerings but is a tight thriller that will leave you breathless.

George Clooney and Sandra Bullock’s performances are equally as solid as the rest of the movie. However, regardless if you love or hate her, Bullock is the true star of this film. As Dr. Ryan Stone her character undergoes a terrifying emotional journey that leaves the audience exhausted. Proving that her performance in 2009’s The Blind Side was no fluke, Bullock shows she can deliver a dramatic role competently and has gained a BAFTA and Oscar nomination in return for her efforts in Gravity.

On reflection, regardless of how engaging the film is, Gravity does unfortunately loose some of its impact when seen on a smaller screen at home but only because it is near impossible to replicate the same feeling at home that you get from watching this movie on IMAX or any decent sized cinema screen. However, this said, Gravity remains a super intense thriller at its core and is the perfect excuse to head off to purchase a 3D television. Otherwise, those wanting to know more about the film will be more than satisfied with the three-hours of special features available on the Blu-Ray release which provide a plethora of extra features for those wanting to know more about the movie.

DVD Extras include: Collision Point: The Race to Clean up Space, Aningaaq (a short film by Jonás Cuarón)