The Editor – a Celluloid Screams Review 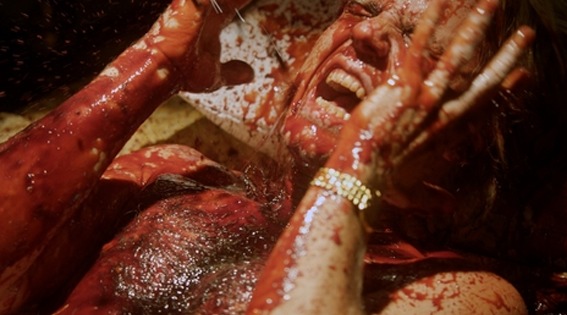 The film perfectly captures the spirit of the Italian Giallo thanks in part to the superb cinematography from Adam Brooks and Matthew Kennedy.
The film does suffer from a slight lag in it's second act.
Total Score
Regardless if you're a Giallo fan or not THE EDITOR remains an entertainingly hilarious experience guaranteed to satisfy without ever going over the top.

Before I start my review I bring you a small history lesson… The Beyond, Deep Red, Mother of Tears, Opera and Tenabrae are some of the most popular Giallo films amongst horror audiences. However, for those of you who don’t know what a Giallo is, this term often refers but is not exclusive to the murder mystery films of the 1970s which often included elements of horror and eroticism.

In its origins, the Giallo began as literal adaptations of the popular crime and mystery pulp novels of the 1960s which were famously packaged in yellow covers. Largely italian-produced thrillers and often associated with strong technical cinematography and stylised visuals, the Giallo began to incorporate elements of the horror genre to thrill its audience.

As well as utlising vivid colours, bizzare angles, close-ups of eyes and other items such as knives, they often throw iconic imagery of black-gloved killers and gruesome violence at their audience. The Giallo also offer an aural experience that is not easily forgotten as music plays a key part. It often mixes soothing tones and jarring stings to add strength to its shocking and provocative imagery.

Despite my love of horror you might be surprised to learn that i’m not a massive fan of Giallo. In fact when I heard that Astron-6 or three fifths of the team behind Manborg and Father’s Day were paying homage to Giallo with their latest effort THE EDITOR, I was apprehensive going into the film but there was no way in hell that I was going to miss out so let’s start my review.

Paying homage to the films of Fulci and Argento, the film tells the story of an experienced film editor called Rey Cisco (played by Adam Brooks). Whilst editing a crime thriller a mysterious killer begins to slaughter the cast one by one and in typical Giallo fashion everyone is a suspect. That is until police investigator Peter Porfiry (played by Matthew Kennedy) turns his attention to Rey who has a limited time to prove his innocence. With The Editor, Astron-6 certainly captures the essence of the 70s and comes with fantastic soundtrack from Goblin which serves as the cherry placed on top of a very delicious treat.

Speaking of Astron-6’s holy trinity, Adam Brooks, Conor Sweeney and Matthew Kennedy, we already know that they have two cult hits under their belts that have really struck a cord with their fans worldwide. Perfectly capturing the spirit of the Giallo whilst expertly walking the edge between homage and parody with their latest film, the team have taken a big step forward in their filmmaking careers with The Editor and I for one am thoroughly satisfied with the result.

Successfully raising some of their money for the film through their loyal army of fans The Editor makes use of their budget beautifully. The team uses a combination technical cinematography, creative lighting, impressive set pieces, special visual effects and impressive practical effects to perfectly emulate the style and feel of the 1970s Giallo. However, at it’s core it is pleasing to know that despite the bigger budget the film still retains the elements that you would expect from an Astron-6 film. It’s fun and it’s crazy, the only difference is that this one comes with higher production value.

As for performances and starring alongside the boys in the film are Paz de la Huerta (Nurse 3D), Laurence R. Harvey (The Human Centipede Part 2), Tristan Risk (American Mary) who are joined by the legendary genre actor Udo Kier. As far as performances lies there will be at least one person that you will fall in love with be it Risk’s performance as the scarlet starlet Veronica, Sweeney’s aspiring leading male Cal Konitz, Kennedy’s lothario cop Porfiry or perhaps you will find yourself hypnotised like I did by Adam Brook’s outstanding talent for growing perfect facial hair which will no doubt inspire beard envy around the world. Either way there is not one person in this film that lets the side down or steps out of place.

Easily this is the best film from the Canadian Film Collective, clearly they love what they do and it shows on screen thanks in large part to Brook’s and Kennedy’s superb cinematography skills. As for non-giallo fans The Editor might not appeal to their taste at first glance but I cannot stress enough that there is no need to worry. Beyond the many references to the works of Argento and Fulci that will surely raise a few smiles amongst Giallo fans, the Astron-6 guys have crafted a cinematic diamond-in-the-rough that is hilariously enjoyable on so many levels making The Editor a film that is worth investing your time in.

THE EDITOR is still doing the rounds on the festival circuit so there is no announcement of a UK release date yet. But never fear, we wouldn’t leave you on the cutting room floor, as soon as we hear news about its release you can bet that we won’t leave you hanging on the edge of your seats.

[HORROR AND SCI-FI EDITOR] Jon Dickinson graduated from Sheffield Hallam University in 2006 with a Bachelor of the Arts degree in Communication Studies with an emphasis on PR and Multimedia. Since graduating he has contributed to several publications and regularly attends some of the biggest film festivals in the UK including Film4 Frightfest.
© 2013 CinemaChords.com
Part of the Chords Network