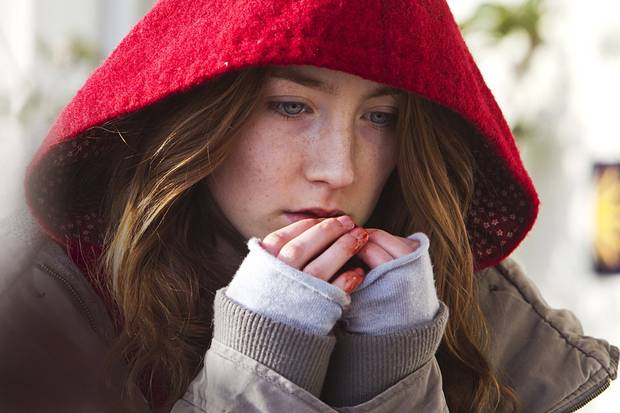 Director Neil Jordan returns to familiar territory with Byzantium, a stylish and seductive gothic romance. Something of a cross between his earlier British werewolf fantasy-horror The Company of Wolves and his memorable Tom Cruise and Brad Pitt starring vampire tale, 1994’s Interview with the Vampire: The Vampire, Byzantium brings a taste of the latter’s sultry, sombre and tragic tale back to British shores.

Eleanor (Saoirse Ronan) and Clara (Gemma Arterton), two mysterious and penniless young women, flee the scene of a violent crime and arrive in a run-down coastal resort. They try to find money and refuge along the tawdry seafront and in the dilapidated hotels. Clara, ever-practical, sells her body. She soon meets shy and lonely Noel (Daniel Mays), who provides a roof over their heads in his seedy guesthouse, Byzantium.

Clara, always looking towards the future, turns it into a ‘pop-up’ brothel. Meanwhile Eleanor, the eternal schoolgirl, meets Frank (Caleb Landry Jones), a kindred spirit who unwittingly prompts her to tell the truth about her life. She tells him that Clara is her mother; yet Clara is only a few years older. She says that she was born in 1804; yet she is just 16. She confesses that she must drink human blood to stay alive – and so must her mother.

In the small, quiet town, people start to die. And the past that the girls have been running from for so long, finally catches up with them – with astonishing consequences.

Like the aforementioned earlier films from Jordan, again he delivers a tale that unfolds slowly and mysteriously with a slow-burn narrative that is always involving and compelling. The narrative structure of intermittent flashbacks to Eleanor and Clara’s backstory is extremely effective and delivers a double layer of intrigue, weaved betwixt the contemporary events of their survival and respective romance.

Portraying vampires again as survivalists, doomed to confront solitude and faced with the moral dilemmas of murder and choosing victims, there is a thematic and philosophical weight to Byzantium that is refreshing and sadly absent from lesser films of the genre. Eleanor and Clara are genuinely strong female characters and there is a convincing chemistry between Ronan and Arterton, in spite of their opposing personalities, they convey a genuine familial love for one another.

The casting all-round is genuinely exciting and a real display of contemporary British talent. Arterton is charismatic, fiery and strong, personifying her character’s struggles through the ages with a knowingly savvy and streetwise air whilst hinting at underlying vulnerability and sorrow. Ronan’s troubled Eleanor is quiet, secretive and ultimately, troubled by her own past and existence. Despite having troublesome archaic dialogue of sombre monologues to deliver, Ronan is capable of transcending what could have been somewhat laughable in the hands of a lesser actress into the truly captivating.

The two female leads are wonderfully supported by a number of familiar, trustworthy British character actors including Daniel Mays and there’s an enjoyable, solid turn from relative newcomer Caleb Landry Jones. Sam Riley and Jonny Lee Miller as the enigmatic military characters Darvell and Ruthven, holding the secret to Eternal Life and the key to Eleanor and Clara’s tragic past, are so fantastically well employed that it’s fair to say that I’m sure I wasn’t the only one craving a spin-off film developing the duo.

Perhaps the true star of Byzantium was Sean Bobbitt’s excellent cinematography. Gorgeously composed and contrasting visual palettes make the dual settings of the film work beautifully; the seedy, red neon of a modern-strip club foreshadowing later violence contrasts beautifully against the natural gothic backdrops  of the past, with the wonder of rivers of streaming blood pouring down the side of a cursed island as immortality is bestowed. Bobbitt has produced truly memorable imagery with Steve McQueen on Hunger and Shame, as well as with Derek Cianfrance on The Place Beyond the Pines, making him one of the truly exciting cinematographers working today.

Overall, Byzantium is a deeply rich and superbly crafted horror tale with interesting and sympathetic characters amidst satisfying shocks and suspense.  The film feels both classical and fresh, delivering a vampire tale highly recommended to anyone.

Byzantium is released on DVD and Blu-ray on 23rd September.

Ryan Finnigan graduated from Sheffield Hallam in 2006 with a degree in Film Studies: History, Theory and Criticism. Since graduating, he has co-founded an independent film production company called [SIC] and a cult film night called The Five and Dime Picture Show. Ryan is the editor of cult film and television website [SIC] Blog and has written articles on film for various outlets including Periodical, No Ripcord and Hope Lies, as well as being a published writer of short stories and poetry. Twitter: @sicryan, @wearesic, @fiveanddimeps Websites: www.wearesic.com & www.sicblog.co.uk
You may also like
DVD