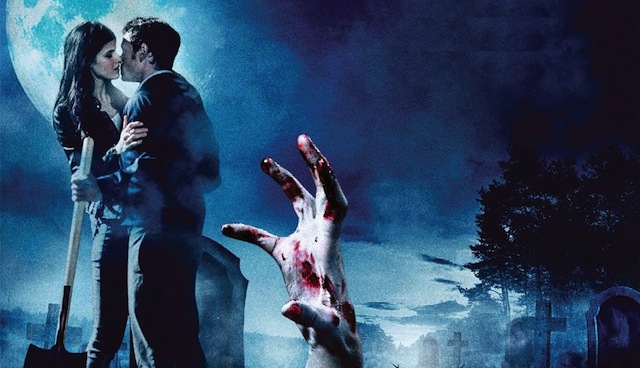 It provides plent of laughs and there is biting criticism from Joe Dante, as should be expected. By being playful, reference heavy and filled with personality and personalities, there is a lot of pleasure to be had.
The cinematography looks amateur, the colouring poor, the cameras cheap, the lenses dull and the shots – all in all – not very interesting.
Total Score
While there is a lot to admire, Burying the Ex feels like a digital Dante imitation but it serves up enough to satiate his fans.

Dante is back, resurrected, and it feels fitting that he bring someone back from the dead as it is the biggest return to form by the director since Small Soldiers. After some disappointing features, none have come close to the Dante treasures from the previous decades. Burying the Ex may not be that good, it may not be a classic that we have come to expect from Dante, but the weight of expectations mean that one cannot deem it a good Dante without it sounding like faint praise. It is like the director has painted himself into the corner and must hit five star classics because anything else is a waste. That is unfair. The expectations themselves are burdening an appreciation of Dante’s work so please, appreciate this.

To pick up on the story, a Hallowe’en shop worker is having some relationship problems with his girlfriend, Evelyn (Ashley Greene), who is a bit mental. The problems come to the forefront after Max (Anton Yelchin) has a friendly conversation about a cereal with Olivia (Alexandra Daddario). No, really. Evelyn sees it as flirting and initiates an argument with poor Olivia. This is the beginning of the final straw for Max, much to the approval of his brother (half), Travis (Oliver Cooper). Before Max can break the bad break-up news to Evelyn, she gets hit by a bus and passes away. Death doesn’t always stop love it seems.

After days on days of digging herself out of her grave, Evelyn returns back to Max’s life, much to his disapproval and wreaks havoc on his budding relationship. As Evelyn decays further, so does Max’s interest in the relationship, but how can one break up with a resurrected love demon? There is a lot of humour you can imagine: sloppy kisses, failing anatomy, crunching bones. Further than that, there is biting criticism from Joe Dante, as should be expected. To make Evelyn’s character even more hellish, she is an environmentalist and vegan. One hopes this is a criticism of how the public view both of those things, rather than a comment on how annoying they are – because they have an actual compassionate point that should not be ignored.

The story hardly holds any surprises, but the cast warm it up with plenty of charm in their performances and a lack of earnestness adds to the allure. By being playful, reference heavy and filled with personality and personalities, there is a lot of pleasure to be had. The problems that are here are weirdly the adoption of digital cameras. The cinematography looks amateur, the colouring poor, the cameras cheap, the lenses dull and the shots – all in all – not very interesting. This is a digital film, shot like a digital student and cut by a learning editor. With a few more bucks for professionalism and production design, a lot could be added to the overall quality.

While there is a lot to admire, Burying the Ex feels overall like a digital Dante imitation. It feels like a Dante film, but more like someone who has great admiration for him trying to encapsulate what makes the director great. Strong personality and charming performances make this a nice little watch, one that will be a delightful surprise to audiences on VOD. The acting elevates the film to a higher quality, charming smiles and an adoption of silliness involve the audience. There is plenty to like in Burying the Ex, but sadly not a lot to love. Dante is back with a nibble, not a bite, but that should be enough to satiate the fans who are setting impossible standards.

[Associate Editor] I'm a film lover, film writer, film graduate who spent many sleepless nights chaining films until the sun came up, making me love all things film and pursuing a career in the industry. Follow @ashleyrhys on Twitter for more ramblings.
You may also like
Reviews