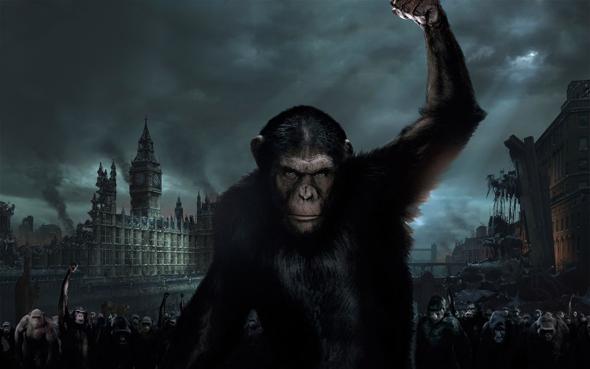 Those damn dirty apes are back!

After Tim Burton’s failed reboot, Rupert Wyatt revitalised the Planet of the Apes franchise back in 2011 with his prequel, Rise of the Planet of the Apes. Both critics and audiences alike responded well to Wyatt’s effort, so it’s a shame to see him being replaced for the sequel, although we’re sure Matt Reeves, director of Cloverfield and Let Me In, will do an excellent job continuing the series.

Rise of the Planet of the Apes ended with the primates retreating into the wilderness as a virus spread, killing most of humanity. Eight years on, survivors of the devastation are now struggling to survive as the genetically enhanced apes grow stronger and stronger, led by the chimpanzee Caesar (Andy Serkis).

While Gary Oldman appears to be the leader of the human resistance, spouting off an empowering speech or two, the trailer suggests that Jason Clarke’s character will be the one we follow as the humans tentatively try to forge an alliance with the apes.
Check out the trailer below to gauge Caesar’s reaction. If looks could kill doesn’t even begin to cover it.

Looks like the new cast and director have done a pretty good job right? But will Dawn of the Planet of the Apes be as successful as its predecessor? Let us know what you think in the comments box below.

In this article:Dawn of the Planet of the Apes