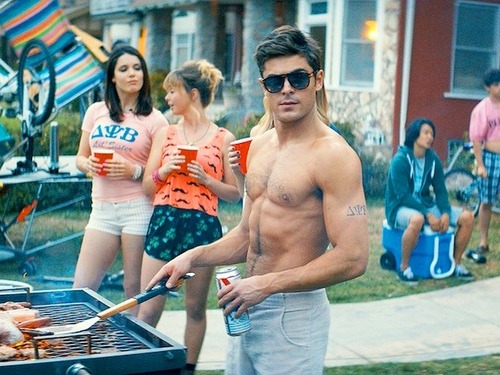 In retrospect the main comedy dish amidst this year’s summer slate was Columbia Pictures‘ This is the End. Based on a new trailer below we are excited to see that master Rogen will be inaugurating next year’s summer blockbusters with yet another serving of comedy. Under the direction of Nicholas Stoller (Forgetting Sarah Marshall, Get Him to the Greek and writer of the upcoming Muppets Most Wanted movie), and produced by This is the End director, Evan Goldberg, Neighbors (formerly known as Townies) finds the comedy star lay down the gauntlet with Zac Efron, here sabotaging his Disney mould of yore, alongside ex-Superbadders Dave Franco and Christopher Mintz-Plasse.

Efron heads up a pack of fraternity boys who move in next door to the now placid Rogen who has settled down with his wife, played by Rose Byrne, and their newly born daughter. As you will have imagined, the aforementioned fratters convert the area into a war zone beyond all imagination.

Neighbors was written by Andrew J. Cohen and Brendan O’Brien (producers of Funny People) with Lisa Kudrow, Safety Not Guaranteed‘s Jake Johnson and Submarine‘s Craig Roberts all in supporting roles.

Take a look at the first red band trailer below for the Universal Pictures film slated to hit cinemas in the UK on March 7th and in the US on May 9th, 2014.