“It was the bravest, boldest and out there script,” James McAvoy announces straight away in a swanky Soho hotel. Just a few minutes’ walk away, Leicester Square is preparing for the English Filth premiere, where there is a giant pig being straddled by the star; all in poster form, of course. “It was possibly the best script I’ve ever read, certainly up there in the top three. If I didn’t get this job I’d would be absolutely disappointed.”

He is talking about the script adapted by Jon S Baird from Irvine Welsh’s 1998 novel of the same name. “It was the first one of Welsh’s books I’d ever read and we met through a mutual friend. From there and a few drinks later I was on board with the project,” Baird states, after all it must have been a risk to develop a book with so much risqué material. “When it came to that, I think we kept a lot of stuff there but when we stopped we started to swerve off a very important narrative.” 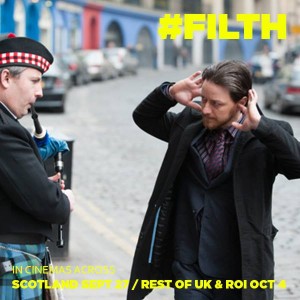 If you aren’t familiar with Welsh’s un-pc story of Detective Sergeant Bruce Robertson, then you aren’t alone. McAvoy wasn’t either. But with the powerhouse screenplay by Baird, he just couldn’t resist the role. Foul mouthed, sex addicted and drug addled Bruce, after all, is a character unlike any other. But above his clueless racism and homophobic rants, it is an in-depth look at one man’s terrifying journey into psychosis. “You meet a guy roughly at the time of his mental breakdown” McAvoy continues “because the real world is breaking through his character and the strength that he has built up.”

Concentrating more on his mental ailment, rather than the flaky balls the novel did, Baird and McAvoy, with input from Welsh, have created a complex character that is rather fun to watch as well as play. But Baird had to have faith in his leading man to pull off such a challenging role. “I met James in this hotel, actually, and by the afternoon we had offered him the part. He just managed to take the role of Bruce so well.”

The pair really understood the crux of Bruce and how to transfer him to the screen. McAvoy comments, “We connected over the mental illness, rather than making it more a collection of shocking jokes or scenes. But we were sure that we didn’t want forgiveness from the audience, maybe sympathy but definitely not forgiveness.”

Of course the movie has to deal with some difficult moments and scenes, “there was one scene, second day in, that I had a moral quiver on. But with a movie like this, I was in for a penny, in for a pound.” After all, Bruce bulldozes through his life, snorting and fucking everything that comes in his way. He is a manipulative and plays games. To his colleagues, he is a mate and a pal when really he spilling out this garbage to impress; a buffoon as McAvoy likes to call him. “Ultimately he fails, and is slowly starting to lose his grip on everything.” 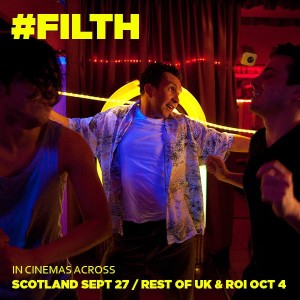 This breakdown comes thick and fast in the movie as Bruce’s games become a series of animal faces, hyper-action and a shakey sanity. Baird dabbles with a Gilliam-esque style. Slicing up some gritty moments with imaginative and colourful fantasy sequences, Filth is a somewhat avant garde piece that has received praise from Gilliam and other idols within the industry. Baird commented, “At a screening, the makeup artist from ‘A Clockwork Orange’ turned to me and said, ‘If Kubrick were here, he would have loved it.’ I felt like a twelve year old again, getting such high remarks.”

The response has been incredible so far but what did Bruce’s creator, Irvine Welsh, think of it all?

“I met Jon through Cas Penn as he was directing Cas’ film about his life. Jon got straight away the importance of the movie and what it really was about; a twisted love story. And he impressed me with his take. There was a level of passion I’d seen in Danny Boyle and John Hodges .”

He is talking about Trainspotting, the 1996 film based on Welsh’s novel. But he assures that they shouldn’t be compared because they are entirely different movies. “Trainspotting is written from the druggies’ and the criminal’s point of view. In Filth, it’s about the man who is putting them away and enjoying his position despite the fact he is just as drug addled and problematic as they are.”
“I didn’t want Filth to be compared to Trainspotting as I didn’t want the pressure that would have come with it,” says Baird who understandably wanted this movie to stand alone without the inevitable comparisons to Boyle’s work; “I wanted the movie to stand alone. They are completely different books” 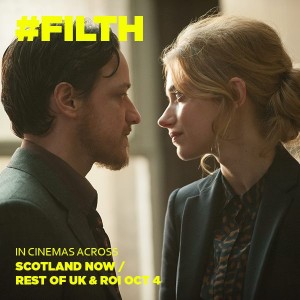 The book is a thick and in depth story of what Robertson eats and drinks, thinks and sees, sleeps and breathes. With so much to dabble with, Welsh must have felt there were scenes from the book that were missed from the movie. “My cameo, which was taken out, ha ha. No, for me it all worked, there were some hilarious and uncouth material that was filmed but when it came to the final product, we all agreed that it took you out of Bruce’s mindset which was the most important part of the movie. It will all be on the DVD extras anyway.”

So as many flock beneath the posters trying to get a little filth in their lives, the stars have done well to produce such already highly received work. In Scotland, Filth is already smashing box office ratings and over here, the critical response is high. Baird mentions, “there has already been such strong responses, funnily enough, from women and England. I think it’s not just something Scottish people are going to relate to, but a film that everyone can identify with at some level. We are hoping to bring it to Japan and Germany, all across the globe really. There is a lot of self deprecating humour and it is an especially dark comedy that appeals to everyone.”

Filth is certainly a riot with jokes that aren’t there to offend but instead, to understand the mentality of Bruce Robertson. “This is a man who has built up a persona of racism, misogyny and homophobia,” our leading man states, “but he is terrified of everything. That’s what I really wanted to focus on, that fear drives people. I’m afraid of everything; about not being loved, not getting the role I wanted or being reviewed badly. Bruce’s problems are born out of fear. It’s not a comment on mental health on a whole but it is a personal look at one man’s issues, how he sees them and how those issues start to lead him further down the rabbit hole.”

With a film about filth it certainly is an animalistic movie. “It’s all about giving into fear and instinct,” but if you are expecting to see McAvoy really straddle the pig, then don’t; it is assured that the bestiality scene has been cut out.

We’ll leave you with a trailer of Filth which opens wide across the UK this Friday, 4th October.

Sarah Cook is a Film Journalist, Director, and Screenwriter. Founder at We Make Movies On Weekends. She will talk about Filth and James McAvoy. A lot.
You might also like
Interviews