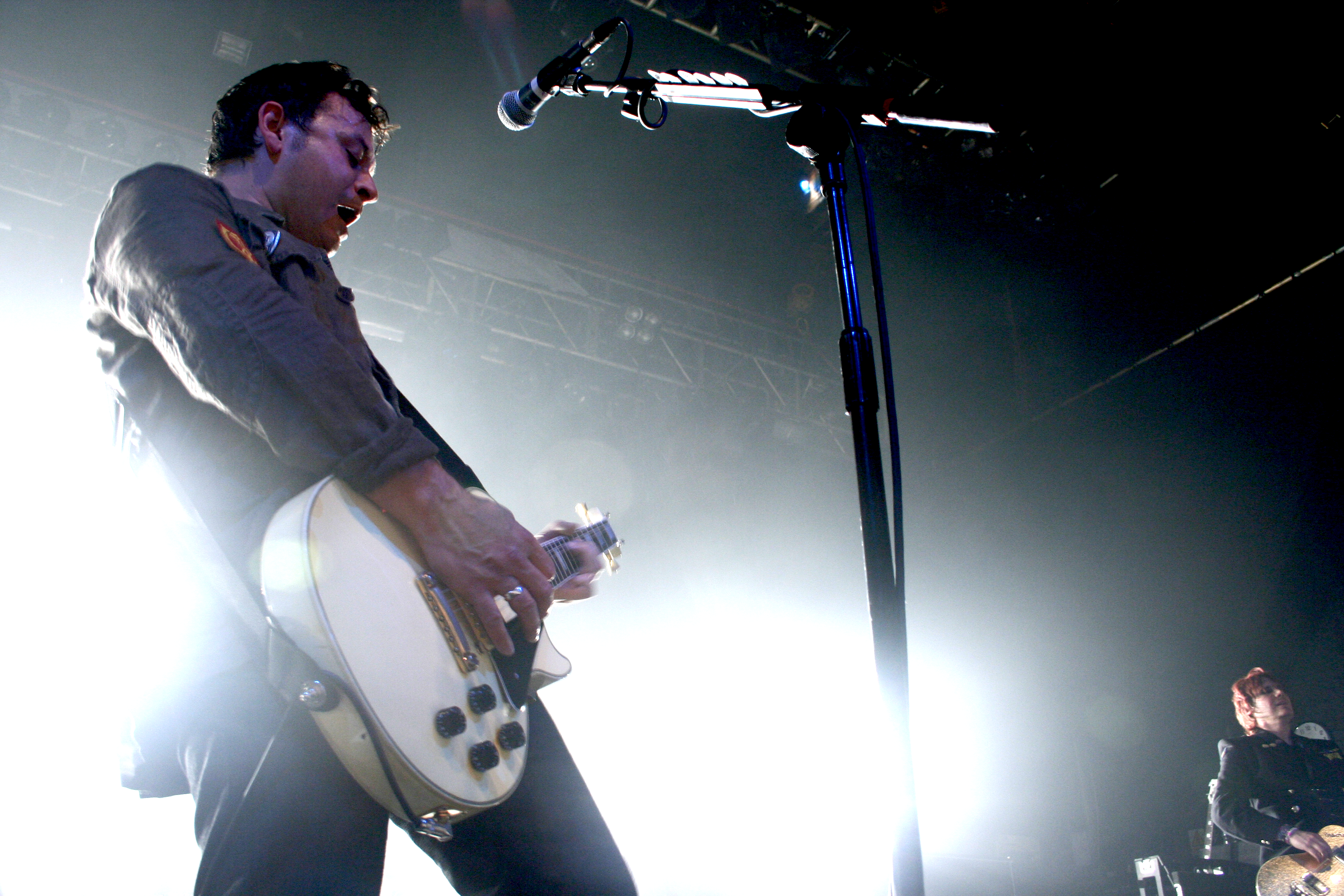 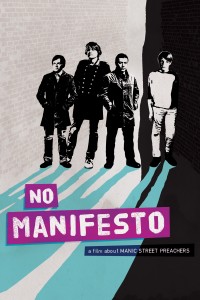 Manic Street Preachers need no intro whatsoever and many of you will be sweaty-palmed with excitement, eager to catch them at their upcoming string of “The Holy Bible” celebratory live shows in May and June this year.

In the meantime, take pleasure in the fact that the band invited director, Elizabeth Marcus and her documentary crew to shadow them to construct a sui generis piece of docutainment going by the name of No Manifesto: A Film About Manic Street Preachers. Described as “a vérité multimedia mash-up experiment that will turn the traditional rock ‘n’ roll documentary upside-down and shake it until all the change falls out of its pockets,” even the most die-hard Manics’ devotees will find more than the odd undiscovered treasure along the way.

No Manifesto marks Marcus’ directorial debut, having cut her teeth working on Bowling For Columbine as an archivist and sound editor. Her love of music dates back to the ’70s in New York and discovering Manic Street Preachers was one of her defining moments as she realised she might just have found the perfect opportunity to combine two of her biggest vices, music and documentaries.

With this intimate and comprehensive piece of film premiering in Cardiff today before screening at various cinemas up and down the country prior to the official DVD and digi release on 16 February, we caught up with Marcus to find out just what it was like to get so close and personal with the Manics…

For your first documentary, what was it about Manic Street Preachers that caught your attention? 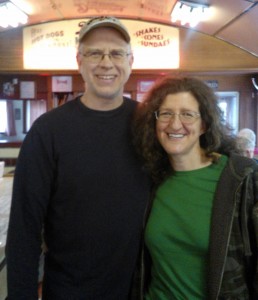 I made a film about the Manic Street Preachers first and foremost because I loved their music. I’ve been a music fan since the age of 5 or so, and throughout my life, music has been the main force that inspired my creativity. I felt that the Manics’ unusual story and colourful and diverse fan base made them an ideal subject for a documentary. I had always wanted to participate somehow in the world of music, but, lacking any musical talent whatsoever,  I had been unable to. Making a film about the Manics gave me that opportunity I so desired.

No Manifesto is a reference to a Nicky Wire comment made way back when. What prompted you to choose this title?

The full quote is, “If literature or music can make you think or become aware, then it’s done something. That’s what we’ve always wanted to do, just ignite sparks in people’s minds. We can’t offer a manifesto: How to make your life better.” I really liked the message in that quote of encouraging independent thought and ideas. I also liked it as a sort of retort to people who seemed to think that the Manics were indeed trying to “preach” specific ideas to their audience. I felt that their aim was not to tell people what to think, or how to think, but simply TO think. That attitude is part of what attracted me to the Manics, and the quote summed it up nicely.

Was the band particularly willing to let you invade their privacy to film such an intimate documentary?

Everything we filmed was at the suggestion and express invitation of the band.  If they didn’t want us to film something, we didn’t film it.

It’s particularly striking to see them rehearsing/recording sat on stools in a shabby bedsit-looking environment. It must have been quite a surprise, and a privilege, to get to see them play in such a laid back setting compared to their energetic live performances. That said, James appears ridden with angst in a couple of those scenes. 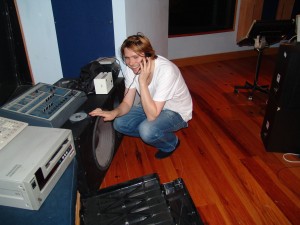 James in the studio is a restless beast, keenly focussed on the job he is doing. When recording, he seems driven by a desire to do the very best work that he can, while at the same time never quite able to be sure that he’s on the right track with what he’s pursuing. In the film, he describes each of their roles in the studio as follows: “I’m searching and looking for validation from people, Nick being quite cynical and fuckin’ grumpy, and Sean playing the straight man.” My interpretation of this dynamic is that James tends to worry and obsess over every detail, while Nicky intentionally provokes him in ways that constructively challenge his musical ideas, and Sean keeps a level head to make sure that the other two don’t get wrapped up in all that to the point where it stops them from getting on with it. It’s difficult to know when observing from the outside exactly what kind of energy is passing among people who are so close and so familiar with each other’s ways and idiosyncrasies, but whatever it is, it obviously works!

It’s quite surprising that Richey started out as the band’s photographer and driver until they decided to teach him guitar. In the film the band call him the only one who broke their moral straightjacket? How much would you agree with that?

I cannot agree or disagree with the Manics’ perception of the role that Richey played in the band. I of course had no opportunity to meet Richey or directly observe Richey’s interactions with the band, and thus I have no foundation upon which to evaluate that relationship. 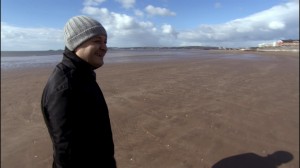 James said “back in the ’80s everything was fucked and they were going to fight against everything” and he saw that as lucky for them.  Would you say their politically-themed lyrics helped them gain more of a following, given the times we were living in, more than their actual musical talent?

I don’t think that’s what James was saying with that quote.  I think what he was saying was that their feelings about the times in which they were living motivated and inspired them to form the band and attempt to rise above the bad circumstances they saw around them, and that they were lucky to have had such a strong motivating factor.

What would you attribute to their never-ending failure to gain as much success in the US?

Bad timing and bad luck. I don’t think they ever had the right song at the right time to break into the US the way some of their peers did, and the fact that their American tours kept failing for reasons entirely beyond their control didn’t help matters either..

James openly admits he was somewhat resentful of Sean at first as he clicked more with Nicky and he thought the band was more of his own creation. He obviously clearly remembers feeling that way back then but does he still kind of feel the band was all down to him?

I think that James greatly appreciates his partners in the Manics, and understands that the unique chemistry among the members is what has enabled the band to succeed.

What is it with the band’s hatred for the song Sleepflower?

I don’t think they hated it. I think that they felt it was one of their lesser songs and were baffled by the demand for it, as well as amused by the way that fans shouting for it became a running joke at their gigs.

You began your documentary career working on Bowling for Columbine as an archivist and sound editor. That must have surely created some kind of instant chemistry between yourself and Sean given the collection of guns he has amassed over the years.

Oh, is that why Sean liked me? I thought it had more to do with the fact that he’d never met a female American F1 fan before! *laughs*

Towards the end the documentary covers Richey’s disappearance and the remaining members talked about how they had some lyrics he had left behind and they were never quite sure what to do with them. What do you think eventually lead them to go ahead and use them?

I think it was inevitable that they would use the lyrics sooner or later. They loved Richey and he is still very much present in their hearts. I think that using his lyrics was a way for them to connect with him again, and to help deal with his continuing absence…

We’d like to thank Elizabeth for taking a moment to speak with us. We’d also like to remind you that Curzon Cinemas will be holding a special screening of No Manifesto: A Film About Manic Street Preachers with Elizabeth Marcus and editor Kurt Engfehr (Bowling for Columbine, Fahrenheit 9/11) in attendance for a post-screening discussion.

We’ll leave you with a trailer and don’t forget, the documentary will be available from February 16 from the likes of Amazon and iTunes.