Ben Parker’s claustrophobic debut The Chamber had FrightFesters ripping the cinema seats to shreds out of sheer tension last August and the same is about to happen up and down the country as the film releases tomorrow. The submarine-set survival thriller follows the pilot of a small craft and a three-man Special Ops team who find themselves trapped somewhere under the Yellow Sea in a fight for survival.

Featuring gripping performances from Johannes Kuhnke (Force Majeure) and Charlotte Salt (The Musketeers) and a haunting, atmospheric score by James Dean Bradfield of the Manic Street Preachers – in his first work for film – CinemaChords caught up with Parker and took to the seas.

CC: The premise and setting for The Chamber was a product of you combining your biggest fears in life.

Ben Parker: I start in a very wide field which is the decision as to what kind of film you want to make. So I tapped into my personal fears and the things that scare me the most and those things were claustrophobia, drowning and global politics (laughs). When wrote the film I wasn’t that sure if I would actually get to make it because I had a few films that had been rejected before. When we finally got the green light, I quickly realised that I was going to have to face my fears and go into that space. But it was good that the shoot scared me because you know that you’ve got the right shot and the right sense of the horror if you’re freaked out about it.

CC: The single and confined location must have brought with it its fair share of challenges.

BP: The first problem lies in the script writing stage. You have to make sure that when you set yourself in a single location, you maintain the attention of your audience and keep the suspense and tension going. I think too many people say, “Out of budget restrictions we’re gonna put it in one location out of budget restrictions.” but they don’t think too much about that properly.

So that first bit was worked on on my own but then the second stage was worked on with a lot of other collaborators. That stage basically involved sharing the burden and responsibility of making sure that we didn’t die when we shot. It was incredibly difficult and a lot of the thanks goes to John Bunker who is a brilliant production designer who designed an amazing Rubik’s Cube of a set. You could remove panels and take it apart in different ways to allow us to get the cameras and the crew in there … and safely. But, as the film goes on and we get closer up with the camera and the water rises, it got a little bit hairy out of the fear of drowning in a slosh pit. (laughs). I think every crew member experienced the horror that we were shooting because they were living it as well.

CC: Coupled with the set, Cinematographer Benjamin Pritchard’s role of keeping the audience engaged and intensifying the sense of claustrophobia whilst taking everyone’s safety into consideration can’t have been an easy task. This was the first time you’ve worked with him so I’m guessing you had some good long talks together.

BP: We tried to think about everything definitely. We had three main lighting phases. We had the normal lighting and then the shut down of the sub lighting and then, as the water comes in, we had this more gloomy light coming in. The changing of the light is something that we talked about at length so that the audience had something different there. And then I credit Ben with a lot of the genius techniques of shooting it. He came up with a way of attaching the camera to a bungee rig to a lot of different places so that he could move the camera in and around and get a more fluid cam. I was going to say shaky cam but it’s not that as I don’t like a lot of that. It’s more of a fluid movement that made things feel a lot more organic and the camera feels almost like another character who is there to constantly remind you that you are underwater.

CC: How did the cast fall into place. Did you cast Johannes Kuhnke after having seen Force Majeure?

BP: I had seen Force Majeure before casting Johannes and it was for that very reason that I didn’t think we would get him. I was very happy that he read the script from cover to end and loved it and he was also a secret submarine enthusiast which I’m sure played a lot in our favour. And then James McArdle is such a great theatre actor and just a great actor who brought this raw energy to the mix. And Charlotte Salt’s part needed to be really spot on. I love character’s like Ellen Ripley where they reach moments where you see their humanity. I tried to show that Charlotte’s character wasn’t heartless. She had a job and she was going to get it done and I actually wanted the audience to feel annoyed with that and feel like she was a bit of an arsehole at the beginning. But then the story slowly reveals that she is truly sorry for what she’s done. Really she is the heart of the message that I wanted people to think that I’m about: The politics and the notion of America versus Europe. Their ideals and their ways of looking of things compared to ours. It’s not that we’re that different but when you’re convinced that you’re right and what you’re doing is right and for the betterment of the world and then at some point realise maybe your meddling has caused harm to some people. Charlotte had to summarise that in her character and had to get that across so I needed a bit of humanity coming through.

CC: You must have done your fair share of research when it came to things like special-ops procedures and protocols.

BP: I went up and got to see the training of the NATO rescue submarine. They sometimes do test runs of it in a loch in Scotland and other times in the Mediterranean. I didn’t get to see it in the Mediterranean and went up to wintery Scotland (laughs). So I got a lot of information there but then my Uncle also used to pilot subs like that and he new about how to get down there and how you would escape and things like that.

CC: There have been some great action movies with amazingly well choreographed set pieces in very confined spaces such as Die Hard, The Raid, Captain America and The Chamber is another we can now add to that list. You worked with choreographer Peter Pedrera who I think you had worked with before on your previous short film, Shifter.

BP: He’s fantastic. He’s the kind of guy that says, “I can do anything that you want and you can set me on fire at the same time if you like.” Unfortunately, we weren’t able to set him on fire this time but hopefully in the next one. He had been working on “Game of Thrones” and all kinds of things like that. He’s ex-military as well so he was definitely within his wheelhouse. He taught us how to deal with practical issues like how to fight in that small space and what was really great was how Charlotte’s character would fight. I don’t know if Edge of Tomorrow had been out at that point but I remember Emily Blunt saying that she had learned Krav Maga for that film and that was was Pete was teaching Charlotte because it’s good in confined spaces and for using other people’s body weight against them.

CC: I’m really interested in asking you about working with James Dean Bradfield on the score. It was his first time working as a film composer and you even had the luxury of him bringing his longtime Producer Dave Eringa and his Engineer Loz Williams into the mix. 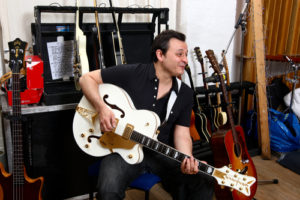 BP: I was over the moon when he said that he would do it. He first read the script before we even talked about him possibly scoring the film and he really wanted to see the film. I think he would have helped produce the film had I not said to him that I thought the best way to get the film shot would be for him to do the score. I know that he was out of his comfort zone but then he also knew that I was out of my comfort zone as this was my first film. We worked really closely together so that he knew exactly what we wanted to achieve and what kind of atmospheric sound we wanted. We looked at a lot of different musicians and other scores. He’s a big film fan and whereas I geek out about the film making aspects of movies, he geeks out about the musical aspects. He really likes Mica Levi’s soundtrack for Under the Skin. I think that was probably the soundtrack that made him think, “Wow. That’s fantastic. I wish I could do something like that.” He’s also a big fan of Krzysztof Penderecki’s work.

When we first got together at his studio, we just started hashing out ideas to do stuff with more non-instrumental sounds by trying to create sounds with different objects. Loz Williams was great at figuring out what could make a sound and then James would make the sound and the score out of those. And then Dave Eringa, who I’d never worked with before, was fantastic to work with. It was quite The Dream Team.

CC: You mentioned a couple of projects in the works when you attended FrightFest last year. Are you able to shed a bit of light on those?

BP: There was a horror movie that we were trying to get made before The Chamber which is still pushing on and which I hope to get made at some point. I also have a project set in the very last days of the Second World War between the fall of Berlin and the surrender of Germany. That was a pretty lawless time and this is a small and violent tale about a group of German resistance fighters called The Werewolves. The film isn’t entirely about them but it’s a story that pertains to them. Again, it’s got everything that I think is going to be my MO: a little bit of politics mixed with horror, violence and tension.

THE CHAMBER RELEASES IN CINEMAS FROM MARCH 10 BEFORE RELEASING ON DVD, BLU-RAY AND DIGITAL DOWNLOAD MARCH 20, 2017

In this article:The Chamber

Directed by first-time feature director Ben Parker, The Chamber follows three members of a Special Ops team and the pilot of a submersible craft...